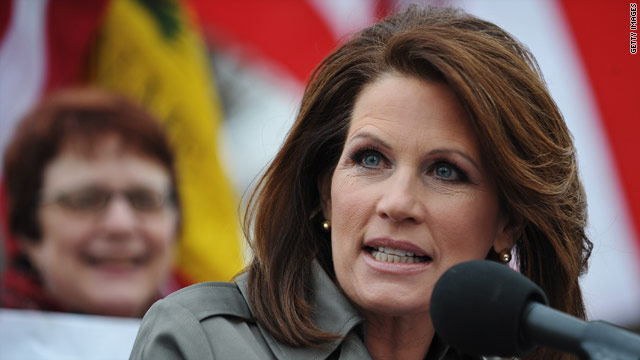 During an interview on CNN's "John King, USA," Bachmann said, "My decision will be independent of whichever candidate gets in. I have great respect for Governor Palin, I consider her a friend, and if she gets in, she gets in."

"That won't impact whether I get in or not," Bachmann asserted.

And the three-term congresswoman confirmed that her decision will, in fact, come next month, whether or not Palin has by then jumped into the presidential race.

Bachmann told CNN Chief National Correspondent John King, "It has absolutely nothing to do with me; it has everything to do with the American people and our economy and were we're going …and my decision about getting into 2012 or not is completely independent."

"My decision will be made on whether I think it is the right thing at the right time, and we'll let you know in June," she continued.

But Bachmann admitted that one thing she'll have to work on if she becomes a candidate is discipline, since she hasn't been "accurate" on everything she's said.

When presented with factual misstatements she's made in the past, Bachmann said, "I think it's important to have discipline in a message, that's true."

"Have I been accurate on everything I've said - no, that's not true. The fact is I read and I read a lot…it isn't' my job to go and fact-check sources that come out in publications," she countered.

But the possible presidential candidate pledged to do better.

"When you're in the presidential realm I do think that message discipline is required, and I think that is something - you know, all of us have areas that we need to do better and that's certainly one that I will pay a lot of attention to," Bachmann said.