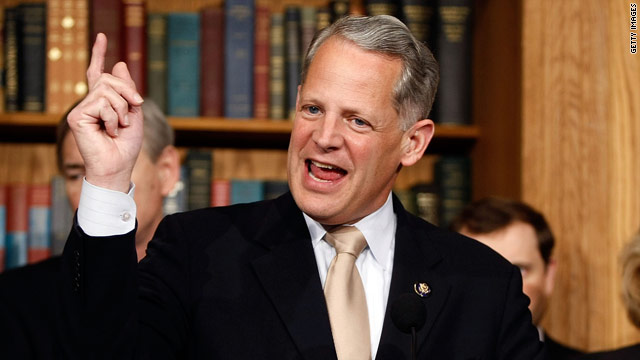 Washington (CNN) - After pulling an upset in a special election in New York earlier this week, the head of the House Democrats' campaign committee proclaimed his party now has a shot at winning back control of the House of Representatives next fall.

"Today I can tell you that I fundamentally believe that the House of Representatives is in play and the Democrats can win a majority in November 2012," Rep. Steve Israel of New York told reporters Thursday.

Israel stressed he wasn't predicting victory "yet," saying "victory in New York 26 is not going to make us cocky." Israel said he believed even before the New York special election that Democrats would be in a good position by the fall of 2011. But now he says the political landscape has shifted so much in recent months, he is comfortable saying House Democrats could pick up the 24 seats needed to retake the lower chamber.

As soon as Democratic candidate Kathy Hochul emerged as the winner on Tuesday night, Democrats said her strategy to pin her GOP opponent to the Medicare proposal authored by House Budget Chairman Paul Ryan, R-Wisconsin, propelled Hochul to an unexpected victory. Multiple Democratic leaders on Capitol Hill predicted it was just the first seat Republicans would lose because of their vote for Ryan's plan. While Israel said Democrats would continue to draw attention to the GOP plan moving forward, he maintained, Medicare "will inform our strategy, it will not be our strategy."

Speaker John Boehner acknowledged Thursday that Medicare was a factor in the special election loss, saying "a small part of why we didn't win clearly had to do with Medicare." But he also criticized GOP candidate Jane Corwin, for whom he campaigned recently, saying, "I could be somewhat critical of how the campaign was run."

Israel pointed to 97 House districts held by Republicans now that are more favorable to Democrats than the seat Hochul won in western New York.

"I am not saying that those 97 districts are in play but I am saying that there are 97 Republican members of Congress who lost sleep over their Medicare vote after the results came in New York 26," Israel said, referring to the Hochul's district.
Israel named areas across the country as examples of opportunities for more Democratic pickups - including Ryan's Wisconsin seat, two seats held by GOP freshmen in Texas, as many as five seats in Pennsylvania, and several in Iowa.

Democratic Sen. Patty Murray, who is charged with keeping the Democratic majority in the Senate, repeatedly argued that public unease about the House GOP plan to overhaul Medicare "has woken people up." She noted the Senate Democrats' campaign committee's website had its most visits in four years yesterday when the Senate held a vote on the Ryan proposal.

A spokeswoman for the House Republican campaign committee said the GOP is standing by its support for the Ryan plan.

"If Democrats want to talk about Medicare from now until Election Day, we're happy to remind the American people that Democrats are the only ones who want it to go bankrupt and the only ones who already cut the program by $500 billion to pay for their government takeover of healthcare," Joanna Burgos said.