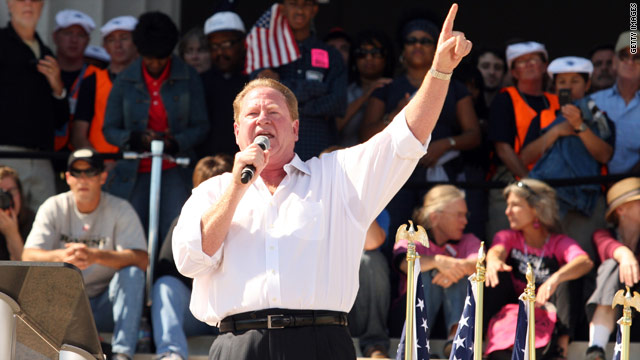 "On my radio show yesterday, I used vile and inappropriate language with talking about radio talk show host Laura Ingraham. I am deeply sorry and I apologize," Schutlz said at the opening of his nightly program Wednesday. "It was wrong, uncalled-for and I apologize for the severity of what I've said."

Schultz, host of "The Ed Schultz Show" said no matter the circumstances, his comments were "terribly vile." He called the experience the "lowest of the low for me."

In a statement, MSNBC said Schultz accepted one week of "unpaid leave for the remarks he made."

"Ed will address these remarks on his show tonight and immediately following begin his leave," the statement read. "Remarks of this nature are unacceptable and will not be tolerated."

On his radio show Tuesday, the liberal Schultz criticized Republicans, and particularly Ingraham for thinking about how much the natural disasters currently plaguing the country "are going to cost" instead of "their next door neighbor."

"President Obama is going to be visiting Joplin, Missouri on Sunday, but you know what they're (Republicans) talking about, like this right-wing slut, what's her name? Laura Ingraham? Yeah, she's a talk slut," Schultz said. "You see, she was, back in the day praising President Reagan when he was drinking a beer overseas. But now that Obama's doing it, they're working him over."