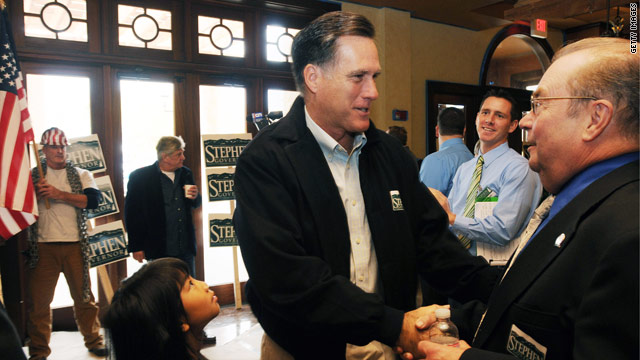 For Mitt Romney, is it all about New Hampshire?

Aides to the former Massachusetts governor and 2008 Republican presidential candidate confirmed that Romney will formally declare his candidacy for White House next Thursday and he'll make his announcement in New Hampshire. The news appears to tell us a lot about Romney's strategy for his second bid for the GOP presidential nomination.

This will be the second time this spring Romney is using New Hampshire as a backdrop to make news. On April 11, Romney announced the formation of a presidential exploratory committee with a video he taped that day at the University of New Hampshire in Durham. The Granite State holds the first primary in the presidential primary and caucus calendar and is considered a must win contest for Romney.

Romney is well known in New Hampshire. As Galen notes, Romney was governor of neighboring Massachusetts from 2003 to 2007, is seen often on TV in New Hampshire (much of the more populated southern part of the state is in the Boston media market), he has a vacation home in the state's 'lakes region' and he spent lots of time in the state in 2007 and 2008 in his first bid for the White House and last year as well, when he lent a helping hand to New Hampshire Republicans in the midterm election campaign.

The strong name recognition and his past efforts in the state are most likely one reason why Romney's far ahead of the rest of the field in a CNN/WMUR poll. The survey, conducted by the University of New Hampshire and released Monday, indicates that 33 percent of probable GOP primary voters in New Hampshire back Romney, with Rep. Ron Paul of Texas a distant second at nine percent.

Romney on Friday makes his first visit to Iowa this cycle, with three stops across the state that kicks off the presidential primary and caucus calendar. And last weekend Romney made his first stop in South Carolina, the first southern state to vote in the road for the White House.

In his 2008 bid, Romney tried to be a player in Iowa and New Hampshire, but the strategy didn't succeed. He lost in Iowa to former Arkansas Gov. Mike Huckabee and to Sen. John McCain, the eventual nominee, in New Hampshire. This time around it seems Romney will be concentrating his firepower in the Granite State.

"New Hampshire will decide who is the anti-Sarah Palin, I.E., the real Republican nominee. Whoever wins New Hampshire and the money and momentum that comes with it, has the nomination in his hands, say Alex Castellanos, a Republican strategist and CNN contributor.

Palin, the former Alaska governor and 2008 Republican vice presidential nominee, is increasingly sending signals that she might be interested in launching a bid for the White House.