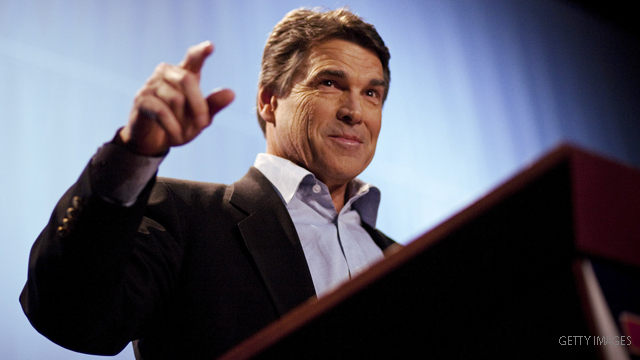 "I'm going to think about it" after the Texas legislative session ends on Monday, Perry told reporters in Austin after a bill signing. Perry added, "But I think about a lot of things."

Perry's remarks come on the heels of a Fox News interview this week in which he admitted that he is "tempted" to run for president.

"Oh, I can't say I'm not tempted, but the fact is this is something I don't want to do," Perry said.

A spokesman for Perry's office immediately sought to walk back his comments, noting that the governor has said he has no plans to run and that his position on the matter "remains the same."

Perry has been questioned about the presidential race on a near daily basis by the dogged Texas press corps, especially in recent weeks following the departure of Mississippi Gov. Haley Barbour, former Arkansas Gov. Mike Huckabee and Indiana Gov. Mitch Daniels from the presidential field.

He has repeatedly dismissed the speculation while also never completely shutting the door on a run.

Perry addressed a Republican National Committee meeting in Dallas earlier this month and impressed a number of state party chairman, several of whom told CNN they would like to see him mount a campaign.

David Carney, Rick Perry's closest political adviser, told CNN that the governor is indeed "thinking" about a presidential bid. But Carney cautioned that it's simply "human nature" to contemplate a run for higher office after receiving words of encouragement from Republican donors and activists around the country.

"Nothing has really changed," Carney said. "He is not running for president. The drumbeat over the last three to four weeks has been pretty intense. But he hasn't made any decision."

Carney said Perry gave an "honest answer" Friday when asked about his ambitions.

"He is thinking about it," Carney said. "Its become a topic of discussion. It's not a systematic look at how he would do this. It's a much more casual thing than that."

A Perry bid would be problematic given the fact that both Carney and Perry's 2010 campaign manager Rob Johnson are currently working for Newt Gingrich's presidential effort.

"That would be a little bit of a complication," Carney said.

Perry also serves as chairman of the Republican Governors Association.

Perry is the longest serving governor in Texas history and won a historic third term last November. But according to the latest University of Texas/Texas Tribune poll released this week, only four percent of Texas Republicans would support Republican Gov. Rick Perry in a bid for the White House.

At the RNC meeting in Dallas, Perry predicted that the Republican presidential field may not be finalized for some time.

"It's a bit early to be identifying who is going to the choice of the Republicans," Perry told reporters. "I think there are still a number of folks out there who have not made a decision about it."