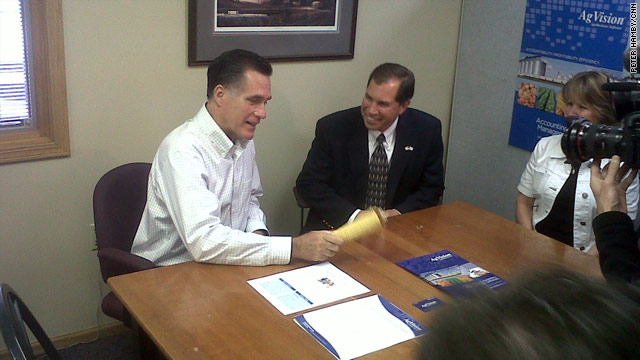 He fiddled with a corn cob at his first event Friday, a tour of an agriculture software business in Ankeny. He endorsed ethanol subsidies, marking a split with one of his chief rivals for the Republican nomination. And a midday forum near the state capital was cut short when a fire alarm was triggered – by a bag of burnt microwave popcorn.

Corn was a seemingly inescapable topic, but the ever-disciplined Romney did not stray from the economic message that is certain to define his presidential campaign, set to be officially announced next week in New Hampshire.

"The issue that most Americans are concerned about happens to be in my wheelhouse," Romney boasted.

Romney criticized President Obama's handling of the economic recovery, blaming him for creating a climate of uncertainty for small business owners. He said his private sector experience gives him a better understanding of how to create jobs.

But Iowans were also closely watching Romney's return to the state for clues about his campaign strategy. The leadoff caucus state dealt a fatal blow to his campaign in 2008 when he finished in second place to Mike Huckabee, despite pouring millions of dollars into winning the state.

Romney's advisers have since telegraphed that his 2012 campaign will focus less on Iowa and more on the next state in the nominating process, New Hampshire, where Romney owns a house and leads early presidential polls by a wide margin.

Reporters and voters alike nevertheless pressed Romney on his Iowa plans, and he came well prepared.

Romney said his return to Iowa felt like "coming home" and promised to be a frequent visitor in the months ahead.

But Iowa's role in the nominating process, he told reporters, "will probably be defined over time by different candidates in different ways."

Romney promised to run a "lean" campaign in 2012 and said his strategy would not hinge on any single state.

He deflected questions about the Ames Straw Poll, a crucial test of each campaign's Iowa organization that will take place in August. Romney spent heavily to win the straw poll vote in the summer of 2007.

"We are going to do what we think is best calculated for me to become the nominee and for me to win the White House," he said at the forum. "I can't tell you right now which things we will participate in."

The comment came moments before someone's overheated popcorn bag set off the fire alarm and broke up the event, forcing Romney and a throng of reporters into the street, where he shook hands, posed for pictures and signed campaign signs leftover from his 2008 run.

Romney was immediately approached by a woman demanding to know why he plans to announce his 2012 campaign in New Hampshire, instead of Iowa.

"We fight so hard against New Hampshire for the first caucus, and you won't announce here," she complained. Romney ignored her and moved away, but not before the woman gave him a pat on his backside.

Another voter asked him directly if he backs federal subsidies for ethanol, an endlessly divisive issue pitting Iowa's corn-heavy agriculture industry against fiscal conservatives who view the subsidies as a wasteful government handout.

"I support the subsidy of ethanol," he answered. "I believe ethanol is an important part of our energy solution in this country."

That position differs from former Minnesota Gov. Tim Pawlenty, who said earlier in the week during his presidential announcement in Des Moines that he supports phasing out ethanol subsidies.

Romney is slated to attend a Republican Party picnic in Cedar Rapids on Friday evening.