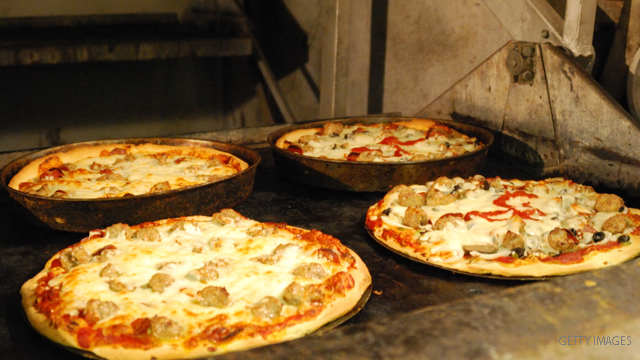 Special delivery from Romney to Obama

(CNN) - Call it a gift from Mitt Romney to President Barack Obama.

The former Massachusetts governor and 2008 Republican presidential candidate, who next week will formally announce his second bid for the White House, was in the president's hometown of Chicago Thursday.

Among other events, Romney met with small business owners to talk about jobs and the economy. The setting was Gino's East, a famous deep dish pizza joint in a city known for its deep dish pizza.

After the event was over, Romney campaign officials had the leftover pizza slices delivered to Obama's re-election campaign headquarters. In fact, Romney tweeted about his gesture, saying "Great deep dish at @ginoseast. Sending the extra slices to @barackobama and his Chicago HQ team."

A source with the Obama campaign confirmed the pizza was delivered, but no word on whether the slices were actually enjoyed, or thrown out.

This delicious tale was first reported by ABC News.

- CNN's Paul Steinhauser and Vaughn Sterling contributed to this report