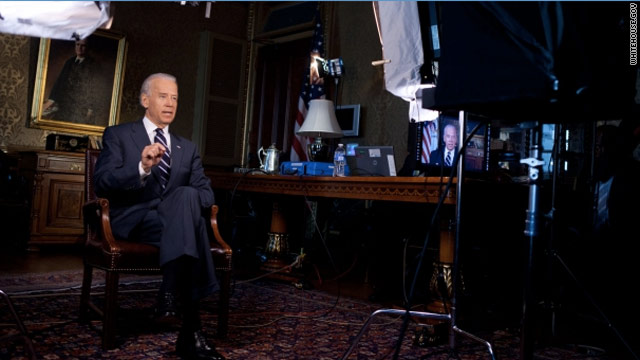 Washington (CNN) - Vice President Joe Biden began the weekly address with “good news” Saturday, praising signs of growth in the economy as seen through the lens of the automobile industry.

“Not only is our economy overall growing,” he said, “one of the important sectors of economy is on the rise again: the American automobile industry.”

Citing the announcement that Chrysler Corp. will repay taxpayers for loans given at the beginning of the Obama administration “six years ahead of schedule” and the progression to three shifts at the GM Hamtramck factory in Detroit, Biden described the economy as “recovering” and “gaining traction.”

“When President Obama and I came into office, we faced an auto industry on the brink of extinction,” he recalled. “Total collapse.”

“Because of what we did, the auto industry is rising again,” Biden declared.

But he also recognized persistent obstacles for others.

“Even for a lot of people with jobs, their wages aren’t keeping pace with prices of everything from gas to groceries to health care and college tuition.”

The vice president pledged that he and Obama would “remain focused” on “not just recovering from this recession.”

“We’re focused on making sure that if you work hard, play by the rules, you’ll be able to get ahead, put your kids through college, retire with dignity and security,” he said.

House Majority Leader Eric Cantor gave an opposing view of the nation’s economy in the weekly GOP address. He said the country’s choice is between “a future with more taxes and more government” or “more growth and more jobs.”

“We face new obstacles as this county finds itself at a crossroads,” Cantor said. “Before us is a choice about who we want to be as a country.”

And the top Republican blasted the administration for opposite findings of Biden’s key message. Instead of job creation, Cantor spoke of job deflation.

He blamed “Democrat-controlled Washington” for “the nearly trillion-dollar stimulus program which drove up our debt and failed to get people back to work.”

Cantor called for a change and outlined the GOP plan to make it happen.

“We’ve got to shift from a government that smothers new jobs and business growth to one that nurtures an environment for getting people back to work and back to what Americans do best: innovate, compete and lead,” he said.

The House leader explained a two-track strategy called “Cut and Grow” adopted in January and designed by Republicans to cut spending and grow the economy because “for too long Washington has relied on gimmicks or government-knows-best solutions.”

He described details of the plan, including: reducing the overall tax rate to 25 percent; increasing competitiveness for American manufactures to boost exports, production and, as a result, available jobs; and repealing “onerous” regulations.

“All of these elements will help encourage growth and long-term economic stability,” he said.

And, adopting a turn of phrase often used by the president to drive home his own point, Cantor confirmed, “Americans will out-work, out-hustle and, yes, ‘out-innovate the rest of the world.’”

The Democratic and Republican leaders both took a moment to remember Memorial Day in their respective speeches.

“I just want to mention once again Memorial Day and remember what this holiday’s all about … we still have thousands of troops deployed in harm’s way,” Biden said.

“All I ask you to do is what my wife, Jill, and Michelle Obama ask, to reach out to those families who have someone deployed in your community. Let them know you know.”

And Cantor shared his vision of the “true grit” of Americans.

“In America, our parents taught us and their parents taught them that, ‘No matter who you are, no matter where you come from, everyone’s got a fair shot, not guaranteed success but the opportunity to work hard and get ahead,’” he said.