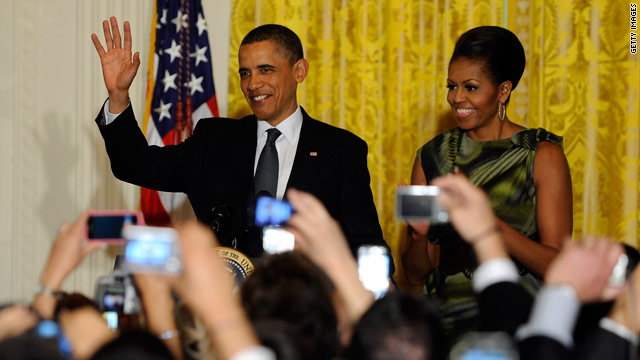 (CNN)- There are 531 days to go until the 2012 presidential election, and a new web video released today by the Obama campaign promises a jump start for a campaign designed to reignite President Obama's backers and build grassroots support.

"In September and October we will see a sea of volunteers come into our offices. We know we have to have an infrastructure in place, an organization in place to properly channel that energy," Obama's Battleground Director Mitch Stewart says in the video.

"What we've learned is that the best way is to have a team up where we empower local volunteers to take leadership roles within our campaign [and] make decisions within our campaign in their neighborhood or in their community based off of the work they have done leading up to the election, but also because of their experience."

"But we have a lot of work to do," Stewart admitted.

A summer organizer program will have supporters going door-to-door, registering voters to build group support within neighborhoods throughout the country, a function that Stewart says will make up the heart and soul of the campaign.

The campaign also plans to make the standard telephone calls, meet with past supporters and prospective new ones individually in a "One-on-One Program."

"The results are a massive army of newly energized volunteers, plus thousands of pages of ideas and feedback that will inform how we shape our organization nationally," Stewart said. "We're going to build it from the ground up. And we're going to use this summer to roll out our team model and organizing structure through grassroots planning sessions in homes and by videoconference."

Such grassroots efforts were also part of Obama's successful 2008 campaign, which incorporated the internet and social networking to rally new supporters and made strides with the help of their "Yes We Can" slogan.

Numbers show the energy is still there for Obama's 2012 reelection. Applications to work on the president's campaign this time around have already exceeded the numbers at this point in the 2008 campaign.

Obama's re-election campaign is headquartered in One Prudential Plaza in downtown Chicago. In his 2008 campaign for president, Obama hauled in a record breaking $750 million dollars.

The president has the potential to raise up to $1 billion in his bid for re-election.