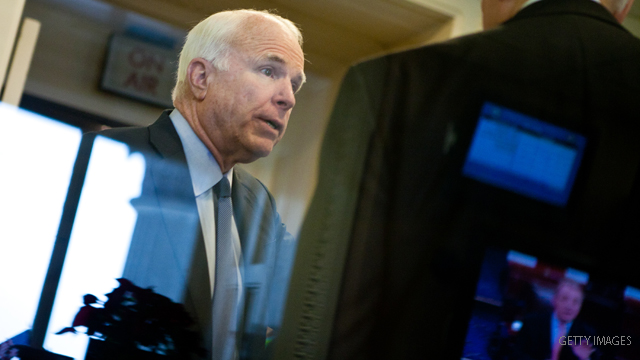 (CNN) - She was his running mate in the 2008 presidential election and now Sen. John McCain thinks Sarah Palin can beat President Barack Obama in 2012.

"Of course she can. She can. Now, whether she will or not, whether she'll even run or not, I don't know," the Arizona Republican said on "Fox News Sunday."

"But she certainly is a major factor and I believe she can be very competitive."

While he said she inspires "great passion, particularly among the Republican faithful," he also said her high unfavorable ratings have something to do with the attacks she's sustained in the national media.

Palin's public flirtation with a bid for the White House reached new levels this week with the announcement of a bus tour that begins Sunday in Washington, D.C. The former Alaska governor has declared the "One Nation" trip an opportunity to "educate and energize Americans about our nation's founding principles, in order to promote the fundamental restoration of America."

But McCain acknowledged the campaign will be a "roller coaster" before the Republicans find their nominee.

When asked about the chances of his 2008 rival, Mitt Romney, winning the GOP presidential nomination, McCain said his biggest problem is "Romneycare," the health care plan Romney signed into law while he was governor of Massachusetts, and which bears resemblance to the current national law.

"I think he realizes that and is trying to address it," McCain said. "Whether he will address it successfully or not, I don't know. But he certainly has a good ground campaign in places like New Hampshire and others where he's really - you know, having been around the block once is always more helpful for next time."