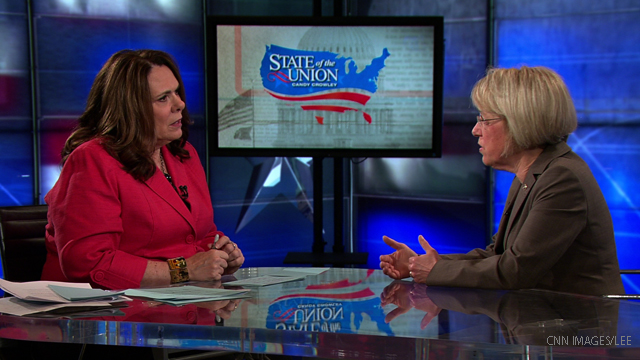 Washington (CNN) – With suicide and unemployment on the rise among servicemen and servicewomen, U.S. Army Vice Chief of Staff Gen. Peter Chiarelli outlined steps the country can take to combat the issues.

In the two and a half years since Chiarelli became vice chair, he has seen a dramatic rise in those soldiers with post-traumatic stress disorder and traumatic brain injuries, jumping from 30 percent of the wounded population or 3,400 individuals, to 8,500 servicemen and servicewomen or 65 percent of the population.

Click to watch video
Click to watch video
We don’t “know the total effect of a decade of war. But I think that’s what we’re seeing,” Chiarelli said on CNN’s “State of the Union.” “Eleven percent of my soldiers have lost an arm or a leg or more in that population.”

To address the growing suicide rate among returning veterans, 156 of whom committed suicide last year, Chiarelli said more must be learned about the brain and the effects of long deployments.

“My personal opinion is we need to find a way to increase the money that's going into … these research efforts and veterans’ programs,” Chiarelli said.

He also said the country needs to help veterans “blend back into the community,” something retired Staff Sgt. Dale Beatty knows firsthand.

Beatty, a North Carolina native, was awarded a Purple Heart for his service in Iraq after he lost both his legs in a blast from an improvised explosive device that nearly destroyed his vehicle. He said the outreach he felt from his community when he returned home “really influenced the way my recovery progressed.”

“I didn’t have time to feel down for myself, especially being in the hospital, seeing people that were hurt worse than me,” Beatty said on CNN’s “State of the Union.” “I just knew I had to drive on for my wife and my two little kids and my family.”

He is one of the many voices calling for Washington and the American people to help veterans as they re-enter society and start a new chapter in their lives.

Paul Rieckhoff, the founder and executive director of Iraq and Afghanistan Veterans of America, said the veterans of today need a “constant and consistent commitment to this generation of warriors,” which is facing education, employment and health challenges.

“If you think about Memorial Day, most Americans are going to go to the beach. We’re going to go to Arlington Cemetery,” Rieckhoff said. “So it really reveals the divide that exists between the military and our veterans’ community and the rest of the American public.”

Rieckhoff said “Washington hasn’t done enough” and issued a call to President Barack Obama, who he said can use his bully pulpit to bring down the unemployment rate among veterans.

There are 3.27 million veterans collecting VA disability and 837,000 currently unemployed, according to the Bureau of Labor Statistics of Veterans Affairs. Eighty-five percent of Americans polled in the most recent CNN/Opinion Research Corporation Survey on the issue said preventing cuts in veterans’ benefits is more important than reducing the deficit.

Democratic Sen. Patty Murray of Washington is one of the politicians advocating on behalf of veterans.

She has introduced two measures aimed at easing the transition of service members into civilian life. The “Hiring Heroes Act of 2011” requires job training for all service members returning home and the “Veteran Employment Transition Act of 2011” gives tax credits to employers who hire veterans while easing the requirements needed to receive the credits.

Murray, who chairs the Senate Committee on Veterans’ Affairs, said “bureaucracy and VA always go right together,” but that when it comes to finding employment a lack of understanding about veterans’ skills and a lack of training are the biggest contributors.

She cited those individuals who have served as a medic or driven a truck for yeas in the service and then are unable to retain similar jobs upon their return.

“We, as a country, have to remember when all we scream about is deficit reduction, we’re going to leave some people behind, and I’m very worried it’s our veterans,” Murray told CNN Chief Political Correspondent Candy Crowley.

“If we don't make sure that we help those men and women who are coming home today get a job, help with their physical and mental injuries, get through the benefits claim process, 20 years from now our country will have on its conscience a high number of veterans who we've lost because of suicide, who are homeless on the streets and who've been lost,” Murray said. “I don't want to see that happen.”