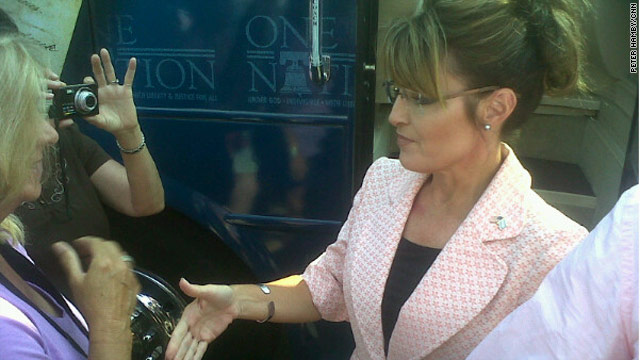 The crowd, made up of both tourists and local citizens, had different reasons for showing up - some wanted to urge her to run for president, others just wanted a glimpse.

Temperatures were well into the 90s throughout the day as they waited.

Some of them said they understood why she could not provide more details of when and where she was stopping because she might run late and because of security concerns.

One woman drove three hours and got to the Pennsylvania monument at 11 a.m. She was still there as of 5 p.m.

Gettysburg resident Brigid Goode got to the park at noon.

"I wanted to see if she was running, see if she would make the announcement," she told CNN.

Goode said she had been following Palin's bus trip on her website.

Her friend Pam Spicnall said, "If we were the last standing we'll be here to support her."

Mark Allen sported a hat urging Palin to run for president. "We know she is going to be here on a family vacation," he said, adding he was excited at the prospect of her mounting a presidential campaign.

There were also several television crews and satellite trucks, including one from CNN, waiting for a possible Palin appearance. Some of those waiting said they were there because they saw the media.