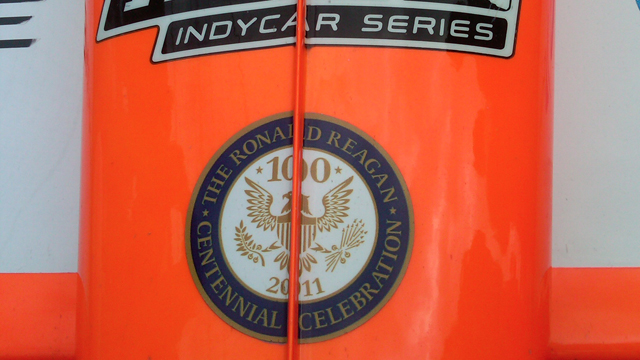 Reagan puts his mark on Indy 500

(CNN) - Former President Ronald Reagan, who once started a NASCAR race from Air Force One, was able to posthumously put his mark on the Indianapolis 500 Sunday.

The Reagan Presidential Foundation's seal honoring the centennial of his birth adorned the nose of the car, driven by racer Dan Wheldon that took the checkered flag Sunday.

"What a historic and poetic moment", Reagan Centennial Celebration executive director Stewart McLaurin said in a statement after the race. A replica of the car with the seal is on display at the Reagan Library.

But this year's race was not the first time the late president was associated with Brickyard. As a presidential candidate in 1976, he drove the pace car for the race, according to his library..

In office, Reagan became the first sitting president to attend a NASCAR race, even giving the "Gentleman, start your engines" call from aboard Air Force One en route to the Firecracker 400 at Daytona, Florida.