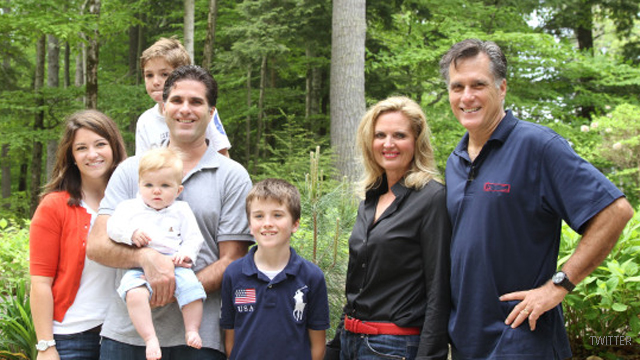 (CNN) - In lieu of a public event on Memorial Day, Mitt Romney sent a twit pic to his followers of his family, featuring the former Massachusetts governor in a polo shirt with slightly disheveled hair.

The new image is a far cry from the stuffed shirt of the 2008 election, when Romney appeared at event after event with perfectly coiffed hair, a perfectly pressed suit and a perfectly tied tie, an image with which late night comedians and political observers had a field day.

Round two, in 2011 has revealed a slightly altered Romney. He appeared tie-less in the video to announce his exploratory committee and in a recent speech to explain the Massachusetts health care plan that has drawn criticism because of its similarities to the national plan.

His sleeves were even rolled up at a recent campaign stop, perhaps a sign he's leaving his Gore-esque façade behind as he gears up for a second run for the White House.

The Mormon Romney was a business owner and a governor. He met his future wife Ann in elementary school and together they have five sons and two homes. A seemingly perfect resume but now with hair that's not quite as perfect.