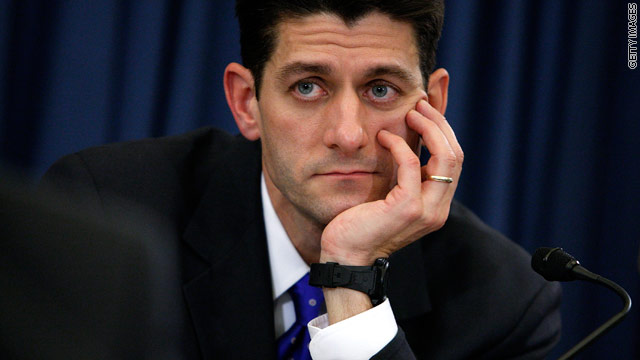 Washington (CNN) - A new national poll indicates that a majority of Americans don't like what they've heard so far about congressional Republicans' plans to change Medicare.

According to a CNN/Opinion Research Corporation survey, a majority also don't think the GOP has cooperated enough with President Barack Obama and, for the first time since they won back control of the House last November, the number of Americans who say that Republican control of the chamber is good for the country has dropped below the 50 percent mark.

The poll indicates that 58 percent of the public opposes the Republican plan on Medicare, with 35 percent saying they support the proposal. The survey's Wednesday release comes as the president met with House Republicans to discuss, among other things, Medicare reform.

The House Republican 2012 budget, authored by Rep. Paul Ryan of Wisconsin, passed the chamber in April without a single Democratic vote and included a proposal to overhaul Medicare. Under the plan, the government would no longer directly pay medical costs for those 55 and younger, but instead would offer subsidies for seniors to use to get private health insurance coverage.

"Half of those we questioned say that the country would be worse off under the GOP Medicare proposals and 56 percent think that GOP plan would be bad for the elderly," says CNN Polling Director Keating Holland. "Opposition is highest among senior citizens, at 74 percent, suggesting that seniors are most worried about changes to Medicare even if those changes are presented as ones that would not affect existing Medicare recipients."

"A majority of all demographic groups don't favor the GOP Medicare proposals," Holland adds. "That includes conservatives - 54 percent of them don't like the plan. As a result, rank-and-file Republicans are split right down the middle, with 48 percent favoring the GOP plan and 50 percent opposed."

The poll is another sign that the House Republicans’ Medicare proposal could be politically damaging to the party. Last week the Democrats won a special election to fill a vacant House seat in New York's 26th congressional district, which the GOP held for over a generation. The Ryan Medicare plan became a major issue in the race, with both the Democratic and Republican candidates, the party committees and outside organizations spending millions of dollars to run ads that focused on Medicare.

Democrats say their victory is proof the House GOP plan is unpopular with Americans, and see the results in New York 26 as a testing ground for next year's elections. But national Republicans disagree, saying the reason they lost the contest was due to the inclusion of the third party candidate, a former Democrat who ran as a so-called tea party candidate.

Last year, GOP leaders repeatedly attacked the health care reform law pushed through by Obama and congressional Democrats, arguing that it would weaken Medicare. Republican congressional candidates crushed their Democratic counterparts among voters age 65 and older in the midterms, carrying seniors by a 21-point margin, which helped the GOP win back the House with a 63-seat net gain.

Has the debate over Medicare made the public regret the outcome of the 2010 midterm elections, which put the GOP in charge of the U.S. House?

"Overall, a plurality still says that GOP control of the House is good for the country, but the margin on that question has narrowed from a 52 to 39 percent margin in November to just a 48 to 44 percent margin now," adds Holland.

And by roughly that same margin, Americans want Obama to have more influence over the direction the nation takes in the next few years, a view that has remained unchanged since the start of the year.

"The results of those two questions, taken together, suggest that in the 2010 election voters wanted to give the GOP enough power to act as a check on the Democrats, but did not vote to give the GOP a mandate to enact its entire agenda," says Holland.

The CNN/Opinion Research Corporation poll was conducted May 24 through May 26, with 1,007 adult Americans questioned by telephone. The survey's overall sampling error is plus or minus three percentage points.