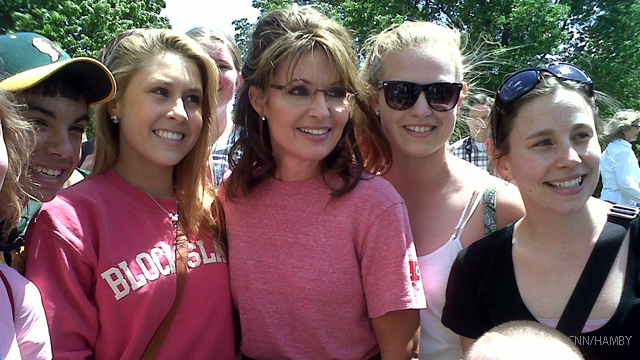 Boston (CNN) - Less than an hour before Mitt Romney was to announce his second bid for the White House in New Hampshire, Sarah Palin appeared in Romney’s hometown and set about picking apart the health care plan he supported as governor of Massachusetts, suggesting it may be a fatal flaw for his candidacy.

Surrounded by reporters for several minutes while visiting the Bunker Hill monument along Boston’s Freedom Trail, Palin delivered her unvarnished opinions of the Romney heath care plan, which mandated that Massachusetts residents purchase health insurance or else face penalties.

“In my opinion, any mandate coming from government is not a good thing, obviously and I am not the only to say so, but obviously there will be more explanation coming from Gov. Romney for his support of government mandates,” said Palin, on day five of her “One Nation” bus tour of historic sites on the East Coast.

Romney has faced almost unceasing criticism from conservatives within his party for the similarities between his legislation and the national health care reform passed by President Obama.

He has wrapped himself in the Constitution to defend himself, insisting that states, not the federal government, should have the right to develop their own laws and regulations.

Palin was not buying it.

“Even on a state level and a local level, mandates coming from a governing body, it’s tough for a lot of us to accept because we have great faith in the private sector and in our own families and in our businessmen and women in making decisions for ourselves,” she explained. “Not any level of government telling us what to do.”

She said the health care law will be “a big challenge” for Romney as he embarks on a second bid for the Republican presidential nomination.

Tea Party activists, she said, want a candidate with “a record of living out the principles that Tea Party patriots do embrace, which of course is smaller smarter government, not allowing the growth of government to be as rapid as our nation has allowed it to be.”

Before departing for her next stop on the tour, which will eventually take her to New Hampshire for an evening appearance in the early primary state, Palin insisted that her presence was not timed to upstage Romney’s announcement.

With a television camera from Manchester television station WMUR pointed directly at her, Palin pledged that the Romney announcement “was never a consideration” as she planned out her tour itinerary.

“In fact, if he personally would be offended by me stepping foot in a state he was in, I wouldn’t do it,” Palin said. “But I don’t believe that Governor Romney is offended at all that we happen to have on our schedule a stop to meet some good people and have some good New Hampshire food at this time.”

Romney was asked Thursday what he thought about Palin being in the state: "That's terrific – New Hampshire is action central today."