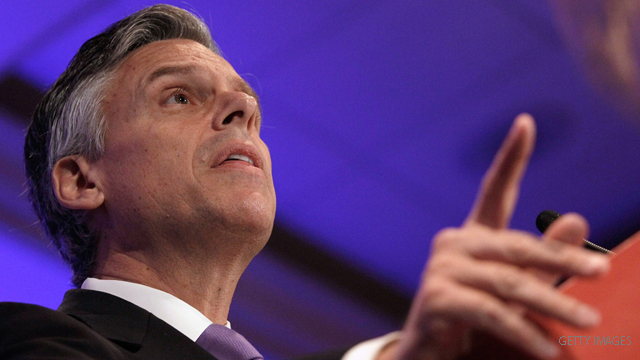 Washington (CNN) - Jon Huntsman's official entry into the race for the White House won't happen before the June 13 GOP presidential debate in New Hampshire, but it could happen soon after the debate.

Speaking to reporters Friday after addressing the Faith and Freedom Coalition conference in the nation's capital, the former Utah governor and U.S. ambassador to China said he hopes to have an announcement "very soon. We've discussed this over the past week as a family, and we hope there will be more on that in the next week or two."

Huntsman will not be attending the CNN/WMUR/New Hampshire Union Leader debate, which is being held on the campus of St. Anselm College.

"Governor Huntsman will be spending the next few weeks continuing the due diligence process in line with the very short decision-making timetable he has laid out. He will not be participating in any debates until after that process is over and he formally announces his intentions. That announcement will not come before the June 13th debate," said Paul Collins, Huntsman's chief consultant in New Hampshire, late last month.

Huntsman didn't show his cards regarding where he will announce his candidacy for the GOP nomination, saying "we'll roll that out at an appropriate time and place, just to hold you in a little bit of suspense."

But he did acknowledge previous reports that his campaign headquarters will be based in Florida, saying "we will be moving, once we're announced, towards a campaign structure in Florida and specifically in Orlando. That is the operating plan at this point."

Asked if there's already an apparatus set up in Florida, he said "I do. I have a wife from Orlando."

Huntsman stepped down as U.S. ambassador to China at the end of April. Since then he traveled to the crucial early primary voting states of New Hampshire and South Carolina, and has begun to build up staff in the two states. Huntsman's aides see his route to winning the Republican nomination starting with strong finishes in New Hampshire and South Carolina, two states where independents are able to vote in GOP primaries.

New Hampshire holds the first primary in the primary and caucus calendar, and South Carolina is the first southern state to vote.

The decision to compete in socially conservative South Carolina might seem unusual for Huntsman given his past support for same-sex civil unions and questions about his Mormon faith, but the Huntsman team is confident that a fractured and wide-open GOP field could leave the door open for a fresh-faced candidate with foreign policy experience.

Huntsman said that part of his address to the Faith and Freedom conference was to "introduce myself and my family" to the gathering of influential social conservative activists.

- CNN's Peter Hamby and Peter Morris contributed to this report.