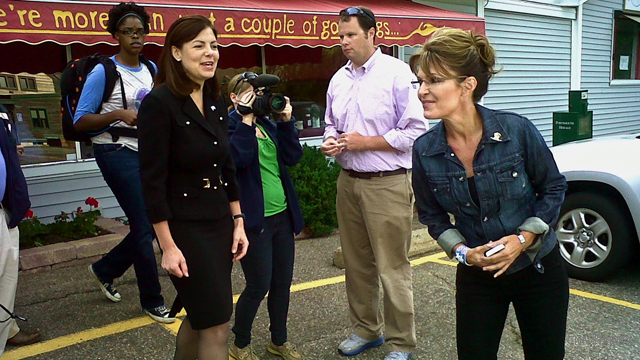 Portsmouth, New Hampshire (CNN) – For all the speculation about her motives, Sarah Palin ended the first leg of her unconventional nationwide bus tour by doing something very candidate-like: Meeting a top elected official over coffee at a quaint New Hampshire diner.

The potential White House hopeful sat down with Republican Sen. Kelly Ayotte, one of Palin's so-called "Mama Grizzlies" from the 2010 election cycle, at the Golden Egg Diner in Portsmouth.

The early morning chat came the day after Palin attended a clam bake in the coastal town of Seabrook, where she greeted voters and a handful of key New Hampshire conservative activists.

Though Palin lent Ayotte a critical endorsement during her tightly-contested 2010 primary fight against Ovide LaMontagne, the two women had only met in person once before.

Palin did not tip her hand about the presidential race during their 20-minute chat over coffee, Ayotte told reporters.

"I respect whatever her decisions are with her future, and I appreciated the opportunity to sit down and have breakfast and see her today," Ayotte said after the sit-down. "I think that really what she does in the future is up to her."

Ayotte's endorsement would be a helpful boost for any Republican candidate, but she said it's too early to make a decision about who she will support.

"What I've said before is anyone who is running for president, I certainly will sit down and talk with everyone about what their plan is for the future of America," Ayotte said.

Palin and Ayotte, joined by Palin's daughter Piper and Ayotte's husband Joe, were overheard chatting about Medicare, snow machines and Palin's plans for the next legs of her national bus tour.

A handful of employees in the restaurant posed for pictures with Palin after the meal, but most of the restaurant-goers seemed not to notice that a United States senator and the world's most famous hockey mom were dining in their midst.

Before heading to the airport for a flight back to Alaska, Palin said she plans to take her bus tour out West, following an upcoming Midwest swing that will include stops in the leadoff caucus state of Iowa.

She said she hopes to meet with Iowa Gov. Terry Branstad when she hits the Hawkeye State. Palin endorsed Branstad in his Republican primary last year.

Palin also revealed that she has been speaking with South Carolina Gov. Nikki Haley, another Palin-backed winner from 2010, about taking the bus to the pivotal primary state of South Carolina.

"I just heard from Nikki Haley the other day in South Carolina, and she'd love for us to hit her state, too," Palin said.

Asked what they talked about, Palin responded: "Oh, just that we're gonna hook up and find each other on the road somewhere and talk about issues."