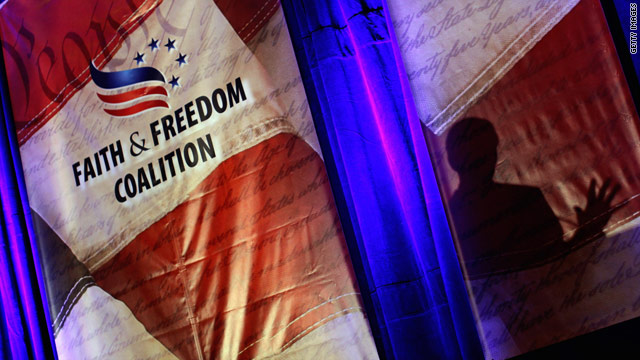 Cultural and economic conservatives team up hoping for 2012 success

Contemplating what could be a bruising fight against Democrats and President Barack Obama for 2012 electoral victory, the two-day Faith and Freedom Coalition conference in Washington this weekend is bringing together cultural and economic conservatives in one of the largest and most public efforts to merge the disparate conservative factions.

Ralph Reed, the longtime conservative power broker and the force behind the event, told CNN, "I say to the Tea Party members and activists that are pro-family and are pro-life and do want to work on those issues: Come and be a part of the Faith and Freedom Coalition. Retain your Tea Party membership, but if you're interested in working on those other issues, we've hung out a welcome sign and believe me, we've got a lot of them here this weekend."

"This is a critical election in our country's history," Meckler said. He later added, "And there's one thing that we all know for sure, it's going to take all of us, from that entire conservative spectrum, to win the elections of 2012."

Should the two factions meld, it would represent a reversal of thought for the Tea Party. Many activists have long stood steadfast against mixing arguments about debt and taxes with emotionally charged arguments on immigration or family values.

The risk, as the thought goes, is that it would create muddled messages, turn off potential sympathizers and possibly drive away members.

Reed addressed that line of thought.

Meckler bluntly acknowledged that often both sides might not get along.

"Sometimes, as movements, we might even be a little frustrated with each other. Sometimes we might feel if we're on the social conservative side of things that the Tea Party should be more involved with socially conservative issues and directly address those issues. And sometimes I can tell you, there are people in the Tea Party movement who say, 'The fiscal troubles of our nation are moral issues. How come folks, for example, in the churches aren't talking about our fiscal situation?' "

And yet Meckler was emphatic that any differences between the groups should be set aside to benefit conservatives as a whole. Especially given that, in Reed's estimation, the number of social and economic conservatives could add up to be over 40 percent of the electorate.