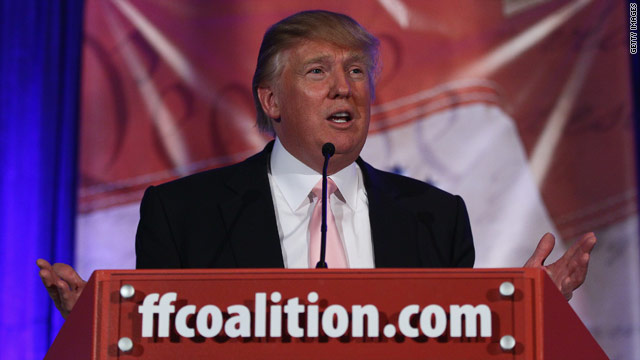 Washington (CNN) – He may have irked some conservatives by flirting with, then bailing on, a presidential run and by recently bailing on a commitment to speak to Iowa Republicans - but Donald Trump appears to remain popular among conservative voters.

In his first major political outing since deciding against a presidential bid in mid-May, Trump wowed the crowd at the Faith and Freedom Coalition conference in Washington on Friday by dusting off his familiar lines of political attack against Democrats and President Barack Obama.

Receiving a rousing standing ovation, Trump set about delivering his crowd-tested and conservative crowd-pleasing criticisms. And yet at times, the real estate billionaire rambled through a series of multiple thoughts.

For example, at one point Trump began to talk about the Organization of the Petroleum Exporting Countries, veered into talk about the Arab League and Saudi Arabia, turned into the conflict in Libya - and even managed to fit in a bit of bombast about his real estate business.

“Now OPEC is having a tremendous time at our expense. Think of Libya. Think of what they… the Arab League. You know what the Arab League is? Saudi Arabia and a couple … and by the way, I have many friends in Saudi Arabia. They buy apartments from me all the time. I like them. They’re nice people. I’m not blaming them. I’m blaming our very, very inept leadership. So they say, ‘Attack Libya.’ Attack Libya. OK, so we’ll attack Libya. So we’re spending billions of dollars attacking Libya. Nobody knows what’s happening. Who have they bombed? How many people are they killing? Where are these bombs landing? In fact, the only one they haven’t gotten is the one they want to get.”

In similar fashion, Trump repeated his slams against China and Iraq, though in both instances, he firmly reiterated his stance that China is manipulating its currency and that the U.S. should get the revenue from Iraq’s oil reserves - something widely discredited by many.

Trump also used his speech to open up new lines of attack on issues currently in the news.

Regarding New York Rep. Anthony Weiner’s current troubles involving a controversial picture, Trump said, “Of course it was his picture. Take a look at those skinny legs.”

And Trump even took aim at the number two most powerful Republican in the House, Majority Leader Eric Cantor - who’d spoken to the same crowd just a few hours before.

“By the way, a certain Republican representative two nights ago I watched on television, Representative Cantor - who I like - said we don’t want to give money to the tornado victims,” Trump said. “And yet in Afghanistan, we’re spending $10 billion a month. But we don’t want to help the people that get devastated by tornadoes. ... We don’t have money for them.”

Cantor recently said that the federal government should provide assistance to victims of tornado devastation in Joplin, Missouri. But the majority leader urged cuts in other federal spending to justify the government assistance.