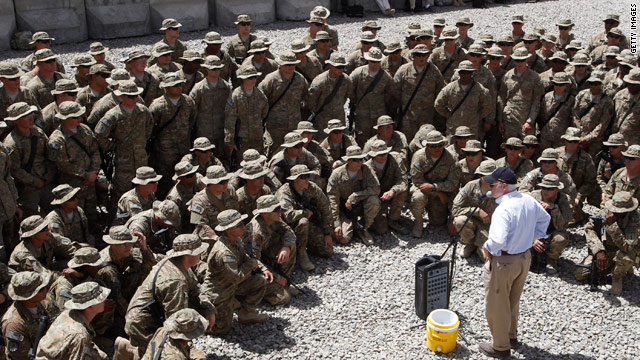 (CNN)- There’s an increasingly vocal group of liberal Democrats and conservative Republicans calling for a much more speedy withdrawal from Afghanistan. They are also getting frustrated with the stalemate in Libya. This odd alliance includes folks like Representatives Ron Paul and Jason Chaffetz on the right and Dennis Kucinich and Barney Frank on the left.

Pressure is mounting on President Obama and his team to get out of Afghanistan especially now that Osama bin Laden is dead. The U.S. now has 100,000 troops in Afghanistan; NATO allies have another 40,000. U.S. Taxpayers spend more than $100 billion a year maintaining that troop presence in a country where the seemingly ungrateful Afghan leader, Hamid Karzai, is threatening to declare the U.S./NATO forces as “occupiers.” If that’s how he and his supporters feel, there are certainly other ways for the U.S. to spend $2 billion a week.

President Obama has said that the U.S. will maintain forces in Afghanistan at least through the end of 2014 – another three and a half years. But he at least wants to start a withdrawal by the end of this July. Some want that withdrawal to be very modest – perhaps 5,000 troops. Others say the withdrawal could be 10,000 – which would bring down the U.S. troop level to 90,000. My own suspicion is that President Obama, like Vice President Joe Biden, wants to get out of there as quickly as possible. But his fear is a resurgent al Qaeda/Taliban presence in Afghanistan and the impact that would have on stability in the country, the potential spread of international terror, the rights of Afghan women, and the increasing tensions with a nuclear-armed Pakistan.