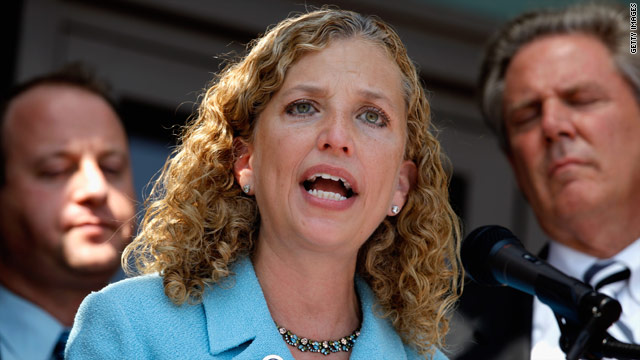 When asked about the measures including identification requirements and shorter windows for early voting Sunday, the Florida congresswoman told Roland Martin, CNN contributor and host of "Washington Watch" on TV One, "You have the Republicans, who want to literally drag us all the way back to Jim Crow laws and literally-and very transparently-block access to the polls to voters who are more likely to vote for Democratic candidates than Republican candidates." But she later backed down.

Wasserman Schultz also compared the controversial measures to poll taxes, fees historically used to keep African-Americans from voting that were abolished in 1964.

During the interview Wasserman Schultz also railed against measures proposed by Florida GOP Gov. Rick Scott that would require photo identification, calling them "barriers" to those trying to exercise their right to vote.

"There is so little voter fraud, which is the professed reason the Republicans are advancing these laws," she asserted. "You're more likely to get hit by lightning than you are to see an instance of voter fraud in this country."

"Republicans are imposing laws all over the country, acting like…voter fraud is rampant, and it's ridiculous," Wasserman Schultz claimed.

In a statement the Republican committee said, "Wasserman Schultz will 'literally' say anything."

"After a week of fact-checks debunking her absurd accusations about the GOP plan to save Medicare, DNC Chair Debbie Wasserman Schultz is back at it again spouting offensive and outrageous statements," said the NRCC.

Wasserman Schultz responded Monday by dialing back her comments.

"Jim Crow was the wrong analogy to use," she said.

"I don't regret calling attention to the efforts in a number of states with Republican dominated legislatures, including Florida, to restrict access to the ballot box for all kinds of voters, but particularly young voters, African Americans and Hispanic Americans."

Wasserman Schultz was elected chair of the Democratic National Committee in early May, following the resignation of former Virginia Gov. Tim Kaine, who is now pursuing a seat in the U.S. Senate.