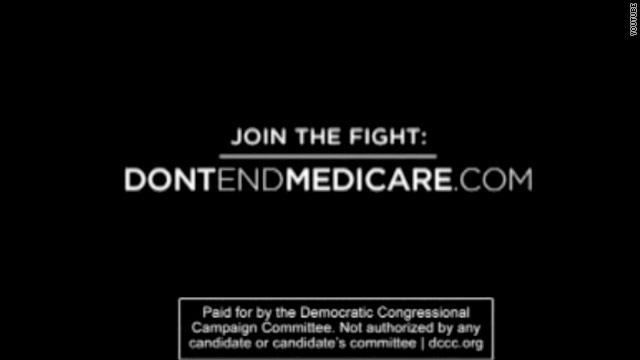 (CNN) – The politics of Medicare continued Monday with two new web videos reiterating the arguments on both sides of the aisle over entitlement reform.

The minute and a half spot from the Democratic Congressional Campaign Committee singled out Republican representatives who voted for the budget plan proposed by Rep. Paul Ryan of Wisconsin, which passed in the House and failed in the Senate. The DCCC said it has a paid advertising campaign scheduled for later in the week.

One voter in the spot said Ryan's budget would "totally dismantle and destroy Medicare as we know it today," while another said Medicare is responsible for curing her cancer.

The Ryan budget included a plan to overhaul Medicare for those 55 and under by offering subsidies for seniors to use private health insurance instead of the government paying directly for medical costs. Congress returns Monday amid ongoing budget negotiations.

DCCC Chairman Rep. Steve Israel of New York rounded out the video by urging supporters to "join our fight."

"I've been paying into Medicare all my working life," Israel said. "I voted to protect Medicare."

An ad from the conservative leaning 60 Plus Association, which posted Friday, blamed politicians for the program's demise. The group said the ad will run on TV at a later date.

"Washington politicians have broken that promise, bankrupting Medicare while telling us not to worry," the ad said. "Empty promises don't work, we must save Medicare. Make it secure and even stronger for future generations."