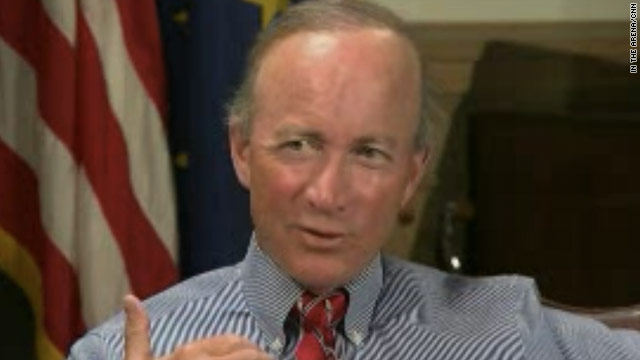 Indiana Gov. Mitch Daniels, who announced last month he would not seek the Republican presidential nomination, told CNN, “I don’t believe in looking back, so no, I think we made the right and only decision for our family and I’ve got plenty to keep me busy and occupied.”

During an interview in his state capitol office, Daniels said since his announcement he has received calls from many of the contenders for the Republican presidential nomination.

He revealed that among those who urged him to run was his former boss, President George W. Bush. Daniels was the Bush administration’s budget director for several years.

“It's almost surrealistic. I mean, I think it takes a certain amount of presumption to think of yourself in those terms and I never had … thought of running for president. But, I felt some sense of responsibility to people who thought we had something to offer– and I hope I didn't let them down.”

Asked if he thought a person needed to be obsessed with being president to run for the job, he said that some say “it might help a little. But if we had decided to try it I think I know a little bit about how to do it, and we would have had some fun with it. And we would have worked as hard as anybody, but I’m not looking back – never expect to.”

“We didn't ask anybody to do anything. I didn't want to unless I was sure that I could uphold my end,” he said.

His family, he said, was never comfortable with the idea to run. “So when I realized that that wasn't going to change, we let everybody know,” he said.

While recent polls show at least a third of Republicans are dissatisfied with the current field of candidates, Daniels said “there’s several good people out there, each of whom is qualified and each of whom will have a good chance” of beating Barack Obama next year.

When pressed for specific names of those who would have a good shot, he mentioned former governors Mitt Romney, Tim Pawlenty and Jon Huntsman.

“Clearly, their economic policies have failed, utterly, and we have an anemic recovery at best, not enough to provide jobs for those who are coming into the labor force, let alone everybody who lost work. And, the debts that are coming really are a terrifying dimension and the president has acted in almost every way to make that worse,” Daniels said.

He did not back away from his earlier call for a truce on social issues so maximum exposure can be given to what he believes is the nation’s most important problem – the exploding debt:

“I likened it to a threat to the national security, which it literally is, and said that if a foreign army … came through one of the borders we'd all put aside our other disagreements for a while and join arms as Americans to repel it. And, I think that the danger that we are facing is every bit as severe as some of those military threats we've faced before.”

As for the seriousness of that debt problem, he said, “The national government is flat broke, at the brink of bankruptcy, and we are facing incredible threat to the American dream if we don't address it.”

When asked if he would be interested in being the vice presidential nominee, he told CNN, “It's very improbable, but there are ways other than running for office that a person can try to contribute something to the national dialogue, and I'll be looking for those opportunities.” When pointed out that that was not a definite no, he said, “It’s a definite nonanswer.”