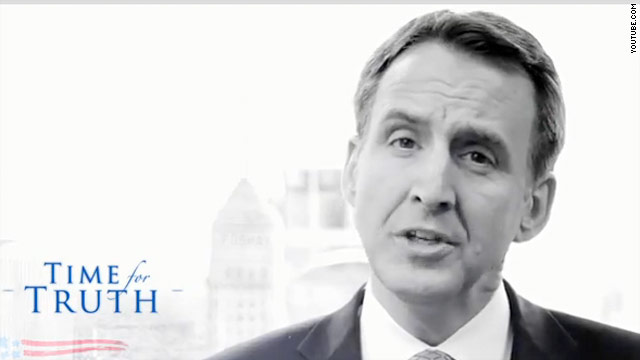 While he has used both the strains of truthfulness and courage on the domestic front in the weeks since his official announcement on May 23rd, he had previously questioned the president's courage on foreign policy earlier in the year. That stopped not long before Osama Bin Laden met his end at the hands of US forces. Now Pawlenty's mantra is limited to issues at home, mainly, the nation's fiscal straits.

So, four years after candidate Obama called for "hope and change" Pawlenty seems to be aiming for "truth and courage." And in the way "hope" may have been a dig at President George W. Bush and "change" was a shot at Hillary Clinton and John McCain, Pawlenty's "truth and courage" more than suggest that neither exist now. Pawlenty says as much in his May 27 web video: We need to make sure we have a president who'll step forward and have the courage to tell the truth and lead on these issues that are going to make or break the future of our country. President Obama won't. I will."

He used a gentler version of the truth line Tuesday in an economic speech in Chicago when he said, "The president wrongly thought the stimulus, the bailouts and the takeovers were the solution. He says they worked. They did not." He added, "I promised to level with the American people. To look them in the eye. And tell them the truth."

It is striking in any case when one candidate goes on the record to question the honesty of a political foil, but especially so this early in the election cycle.

The courage issue also stands out, as Pawlenty uses the word in Hemingway-esque proportions. It is the title of his memoir, "Courage to Stand," and his first web video from January. And although the usage of the theme has accelerated after his announcement, he twice explored it to sharply criticize the president earlier this year.

After the president's State of the Union address in January, Pawlenty discussed entitlement reform on Fox News and said, "He has got all this soaring rhetoric, but the fact of the matter is he's chicken to address the real issues."

In April, however, Pawlenty took a different tack from the president's leadership on the deficit. According to Politico, he joked to Dennis Miller, "I think what happens now is that the intel folks brief him in the morning and he's looking for a pair of Depends."

Since then, Obama ordered a daring operation in Pakistan that left Osama bin Laden dead, and Pawlenty has since shied away from questioning the president's courage on national security issues.

As tough as Pawlenty has been on the president, he has generally held his fire and avoided openings to overtly criticize his fellow Republican hopefuls. When pressed at a Fox debate on former Massachusetts Gov. Mitt Romney's health care plan, Pawlenty said, "Well, Governor Romney is not here to defend himself and so I'm not going to pick on him, or the position that he took in Massachusetts."