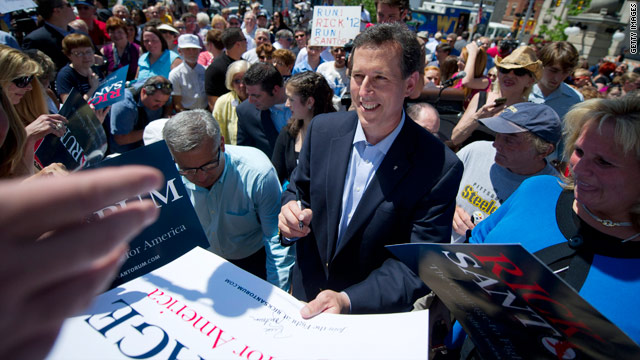 Former Pennsylvania Sen. Rick Santorum greets supporters in Somerset, PA during the announcement that he will seek the GOP nomination for president in 2012.
June 7th, 2011
09:13 PM ET

Santorum: ‘I talk the talk and I walk the walk’

“I’ve been a great, consistent leader of the conservative cause,” said Santorum, a former Pennsylvania senator. “I’ve been someone who’s had ideas, fought for those ideas and have been able to accomplish things.”

He stood firm on his social values, affirmed his support for a constitutional ban on same-sex marriage and listed his accomplishments in and out of office.

Among them, Santorum told CNN Chief National Correspondent John King that he “authored the legislation” that “led the charge” to reform welfare, an achievement he described as ending the “federal entitlement.”

And “entitlement” is a catchphrase for conservatives, as House Republicans continue to grapple with GOP House Budget Chair Paul Ryan’s plan to dramatically alter Medicare.

Santorum said he supported Ryan’s controversial plan, and he wouldn’t stop with Medicare.

“If you look at my record on economics and the problems facing today, I’ve never voted for a tax increase … [I’m] someone who has had the courage to stand up in good times and in bad and to deliver the conservative message, [I] lead the charge on Social Security reform.”

And though his stance on that reform may have cost him a Senate seat – Santorum backed President George W. Bush’s plan to privatize Social Security – he believes that solution isn’t feasible anymore.

“We’re not in a situation where we can do that,” he said.

“We’re either going to have to raise taxes or cut benefits – some combination that is going to be necessary. Unfortunately, that’s where we’re stuck.”

Santorum, who’s seeking the GOP nomination for president in 2012, graded the current president on his performance. Though he stated that President Barack Obama has “done a good job” in Iraq, he was careful to hedge the approval.

“He’s continued the policies that were successful toward the end of the Bush administration. He’s finished those and I think Iraq now is doing well,” Santorum said.

But when it comes to Libya, the candidate says Obama is just plain wrong.

“I can’t imagine handling [Libya] any worse than a president going out and saying that [Moammar] Gadhafi has to go [and] doing nothing about it,” he said. “I mean, it’s been all over the map and it’s committing American resources for a very unclear objective.”

When it comes to 2012, Santorum believes he’s the best candidate to take Obama’s job because, “I talk the talk and I walk the walk and I think that’s what people are looking for – an authentic conviction conservative who has the ability to bring people together to get things done.”

On Monday, June 13, CNN will host the first New Hampshire Republican Presidential Debate, live from Manchester, NH at 8 p.m. ET. Follow all the issues and campaign news leading up to the debate on CNNPolitics.com and @cnnpolitics on Twitter.