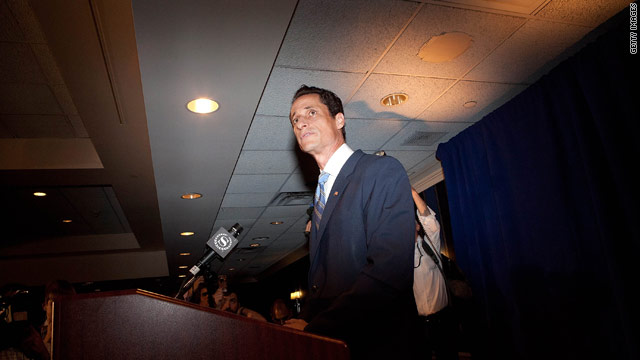 Washington (CNN) - A Democratic lawmaker familiar with discussions with and about Anthony Weiner told CNN that Weiner’s colleagues are telling him this afternoon he should resign “to preserve his own dignity.”

This Democratic congressman says this afternoon’s public call by Democratic Rep. Allyson Schwartz, D-Pennsylvania, for Weiner to resign is part of a new stepped up effort to force Weiner out. Schwartz heads up recruiting efforts for House Democrats for the 2012 election cycle. The source said the effort includes private and public calls explicitly telling Weiner it’s time to leave Congress.

“There is increased resentment by his colleagues that far from having a press conference where he was going to tell the truth and roll with the flames, the flames are just getting worse and he’s dragging us through it. We really thought by now, after the press conference, we would be able to talk about the Republicans’ Social Security privatization bill and instead we keep talking about Anthony Weiner. And people are getting angrier and more resentful,” said the Democratic congressman.

The lawmaker would not speak on the record in order to discuss private conversations, and would not give the names of Weiner’s colleagues making these private calls.

This Democratic congressman cited a new x-rated photograph now flying across the internet, allegedly of Weiner, as the latest example of how this issue is not going away, but said it is unclear if Weiner is going to listen.

“I think he is truly conflicted and the people around him are truly conflicted. Nobody knows what is going to work. I mean, he doesn’t know what he wants to do. Really, I think he’s really conflicted about this. But there is real growing resentment among his colleagues,” said the Democratic congressman.

In addition to Schwartz, calls from other House Democrats for Weiner to step down started trickling in on Wednesday.

"I am hoping that the congressman will do what's right for his family, and probably the best decision would be to step down," Michaud said.

Late Wednesday afternoon Indiana Democratic Congressman Joe Donnelly, who is running for Senate, called on Weiner to step down from Congress and said he’s donating $5,000 in campaign contributions he received from Weiner to Indiana charities.

"Enough is enough. It's time for Congressman Weiner to resign. His actions have disgraced the Congress. Everyone should be focused on jobs and the economy and his refusal to do the right thing is a distraction,” Donnelly said in a statement.

A senior conservative Democrat, Rep. Mike Ross, Arkansas, told the AP at an event in Pine Bluff, Arkansas, that Weiner should have resigned when he confessed that he sent inappropriate photos. Ross also said “appropriate authorities” should investigate. Ross’ office confirmed the congressman’s comments to CNN.

Massachusetts Rep. Niki Tsongas’ Chief of Staff Katie Elbert Enos, released a statement saying, “The Congresswoman thinks it would be appropriate for Congressman Weiner to step down.”

The Democratic lawmaker familiar with the behind the scenes talks also said to expect more public calls Thursday but warned that this story is “changing by the hour.”

Asked about the new public calls for Weiner to resign Wednesday, a senior Democratic source said, “It’s a signal that represents a growing concern in the caucus.”