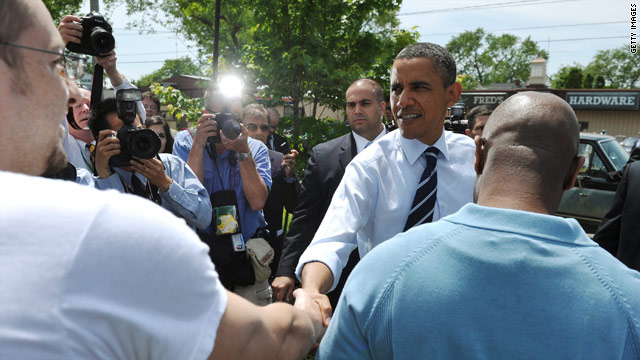 Washington (CNN) - President Barack Obama heads to the battleground state of Virginia Wednesday for the second time since he announced his re-election bid on April 4.

The president's scheduled to give an address on the economy and jobs at an event at the Northern Virginia Community College in Alexandria, Virginia. Obama held a town hall in nearby Annandale, Virginia in April.

In 2008, then Sen. Obama became the first Democrat to win Virginia in a presidential election since 1964. But since his victory, the tide appears to have turned. The GOP won back the state's governor's office in 2009 and won back three Democratic held House seats in last year's midterm elections. Besides the presidential contest, Democrats will try to hold onto an open Senate seat next year.

As Obama visits northern Virginia, the Republican National Committee is pushing the argument that Virginia, along with a bunch of other battleground states, have moved away from the president and his party since 2008.

"His path to re-election must go back through those states, but his prospects there are far from certain. In only two and a half years, his position in those states, and in many others, has deteriorated dramatically, and Republican strength is in plain view," writes Wiley.

Those states "saw one US Senate seat, four Governorships, seven State Legislative chambers and 19 US House seats move from the Democrat to the Republican column during Barack Obama's term in office, with none of the aforementioned moving in the opposite direction," adds Wiley.

"Voters in these states and others will have a chance to compare the President's record – 15 straight months of private sector job growth, turning the American automobile industry around and putting our economy on the road to recovery – and the priorities of the Republican Party which boil down to wanting to end Medicare so they can provide tax breaks to millionaires and billionaires," responded Democratic National Committee Communications Director Brad Woodhouse, in a statement to CNN. "Faced with that, we're confident which choice voters will make."