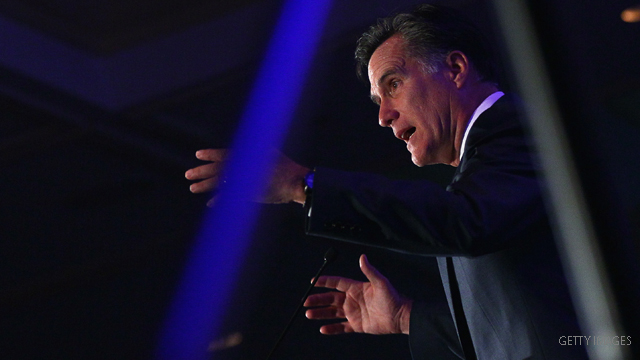 Washington (CNN) - For the second straight day, Mitt Romney is on the top of a national poll in the battle for the GOP presidential nomination, and does better against President Barack Obama in a hypothetical general election matchup than any other tested Republican White House hopeful.

According to a Quinnipiac University survey released Wednesday, a quarter of Republicans and GOP leaning independent voters say they would back the former Massachusetts governor and 2008 White House candidate if the 2012 Republican primary for president were held today. Fifteen percent of people questioned say they would support former Alaska Gov. Sarah Palin, who is flirting with a bid for her party's nomination.

Businessman and radio talk show host Herman Cain is at nine percent, with former House Speaker Newt Gingrich at eight percent, as is Rep. Ron Paul of Texas, who is making his third bid for president. The poll indicates that Rep Michele Bachmann gets the support of six percent, with former Minnesota Gov. Tim Pawlenty at five percent and former Sen. Rick Santorum of Pennsylvania at 4 percent. Former Utah governor and former U.S. Ambassador to China Jon Huntsman, who is likely to announce a bid, is at one percent, with one in five undecided.

"Whether it's because of the media coverage of his recent formal announcement, or the fact that Donald Trump and Mike Huckabee have dropped out, Gov. Romney has surged ahead of the Republican field," says Quinnipiac University Polling Center assistant director Peter Brown. "Until now Quinnipiac University's polls have shown many candidates bunched together in the mid-teens, now he has opened up some daylight on the field and is within six points of the president."

The Quinnipiac survey comes out a day after an ABC/Washington Post poll also indicated Romney on top in the GOP nomination horserace, at 21 percent, with Palin at 17 percent and everyone else in single digits.

In a hypothetical general election matchup with President Barack Obama, the Quinnipiac survey indicates Romney trailing Obama by a 47 to 41 percent margin. According to the poll, the president leads Pawlenty by 12 points, Huntsman by 14 points and Palin by 17 points. The survey also indicates voters are split on whether the president deserves re-election next year.

In the ABC/Washington Post poll, Romney holds a slight three point margin (within the survey's sampling error) over the president in a 2012 general election hypothetical matchup. All other candidates tested trail Obama.

The Quinnipiac poll suggests Romney's religion may be a problem as he makes a second bid for the White House. According to the survey, 36 percent of people say they are uncomfortable voting for a Mormon, including 17 percent who say they are "entirely uncomfortable." Huntsman is also a Mormon.

The Quinnipiac University poll was conducted May 31 through June 6, with 1,946 registered voters questioned by telephone. The survey's overall sampling error is plus or minus 2.2 percentage points.

The ABC/Washington Post poll was conducted June 2 through June 5, with 1,002 people questioned by telephone. The survey's overall sampling error was plus or minus 3.5 percentage points.