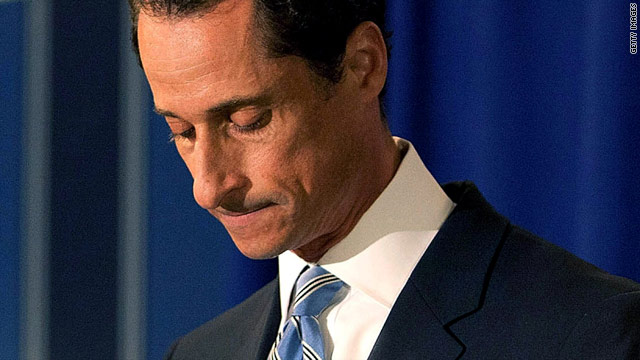 A source familiar with the call would not characterize it in more detail and called it a private conversation.

Weiner admitted Monday to having ongoing relationships with women via social media and lying about a lewd photo sent to a college student in Seattle.

After insisting his account was hacked, the seven-term New York congressman came clean during an emotional press conference.

Weiner's wife, Huma Abedin, serves as Secretary Hillary Clinton's chief-of-staff and is well-liked in Democratic circles. The former president officiated at the couple's wedding, and he and the Secretary of State have been extremely close with Huma for years.

Democratic sources say Weiner has made many calls to colleagues and supporters over the last few days. At the same time, pressure has been building for the congressman to resign.

A Democratic congressman who got a telephone call from Anthony Weiner Wednesday tells CNN that the New York Democrat called to personally apologize for what he had done, and said he “doesn’t know what got into him.”

The Democratic lawmaker, who did not want to speak on the record about a private conversation, said Weiner was “very contrite” and said he “let everyone down” and that he is “going to try to redeem himself.”

The lawmaker said Weiner was so choked up, he could “barely get the words out” and also said he was going to “get some help.”

This Weiner colleague tells CNN he did not ask Weiner to resign because he doesn’t want to get part of “kicking him out the door, nor do I want to be part of saying he should stay” because Weiner is the one who must make that decision.