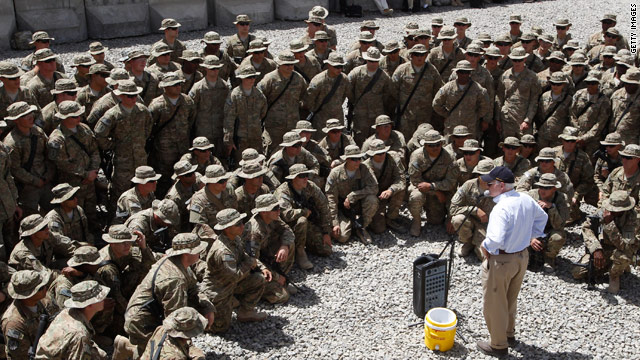 Washington (CNN) - In the wake of Osama bin Laden's death, a plurality of Americans believe for the first time that the U.S. is winning the war in Afghanistan, and support for withdrawing U.S. troops from that country has risen significantly over the past month, according to a new national poll.

A CNN/Opinion Research Corporation survey released Thursday also indicates that support for the war is now at 36 percent, its lowest point this year.

Nearly three-quarters of those questioned say that the U.S. should withdraw some or all of its troops from Afghanistan, a ten-point jump since May. The number who say that the U.S. needs to have troops in Afghanistan to prevent a terrorist attack in the U.S. stands at 53 percent, a drop of nine points since last September.

"Both of those changes are likely a reaction to the death of Osama bin Laden," says CNN Polling Director Keating Holland. "Nearly nine in ten Americans believe bin Laden is really dead, although 11 percent think he is still alive."

"The survey indicates that skepticism about the al Qaeda leader's death is highest among younger Americans and those with no college education. Liberals are also more likely than moderates or conservatives to think bin Laden is alive, although it is important to note that very large majorities in all demographic groups think bin Laden is dead," adds Holland.

The poll's release comes one day after the release of a congressional report which stated that the United States' nation-building projects in Afghanistan can claim only limited success and the troubled nation risks sinking into deeper crisis after a planned U.S. troop withdrawal.

The two-year investigation found that, despite the roughly $18.8 billion spent in aid to Afghanistan over the past decade, more than to any other country, the United States should "have no illusions" about the value of its programs aimed at stabilization.

Defense Secretary nominee Leon Panetta said Thursday that the United States and its allies "have made progress with regard to securing" Afghanistan, "albeit fragile and reversible."

Panetta said greater progress needs to be made, particularly in terms of Afghan self-governance, so that "ultimately they can take responsibility for that country."

Testifying before the Senate Armed Services Committee, Panetta refused to say how fast the U.S. military should start withdrawing from Afghanistan in July. Any withdrawal should be "conditions-based," he said.