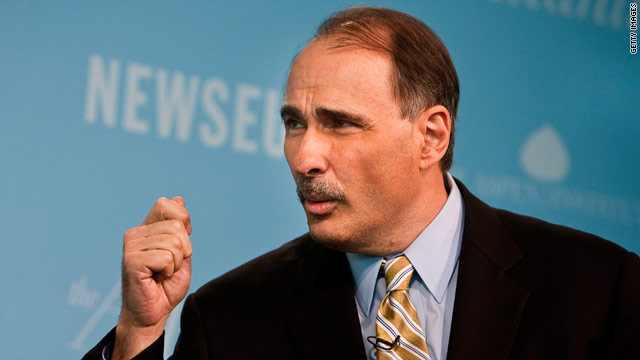 Pawlenty outlined his plan to spur economic growth through tax reform and spending cuts during a speech Tuesday in Chicago, the site of the president's reelection campaign. His proposals included lower tax rates, a temporary spending freeze and a "Google Test" aimed at encouraging private enterprise.

"If you can find a good or service on the internet, then the federal government probably doesn't need to be doing it," Pawlenty said.

He referenced the government printing office, Amtrak and Fannie and Freddie. Pawlenty spokesman Alex Conant later said he is open to ending government funding for those programs.

Axelrod, who stepped down as White House senior adviser earlier this year to reprise his role as chief strategist and top political adviser for the 2012 reelection campaign, also used the test to jab Pawlenty's record as governor of Minnesota.

"Then he should also Google 'budget deficits in the state of Minnesota.' And what he'll find is, when he left, he left a projected deficit of $6.2 billion, which doesn't exactly qualify him as an expert on fiscal responsibility," Axelrod said.

Team Pawlenty pushed back Thursday against those critical of the governor's record, which he continually touts in campaign stops. In response to Axelrod's comments, Pawlenty's spokesman knocked Obama's record.

"President Obama's team is content with anemic growth and trillion dollar deficits for as far as the eye can see," Conant told CNN. "Frankly, we're not going to be lectured by somebody who helped rack up trillions in new debt and accepts pathetic economic growth as the best America can do."