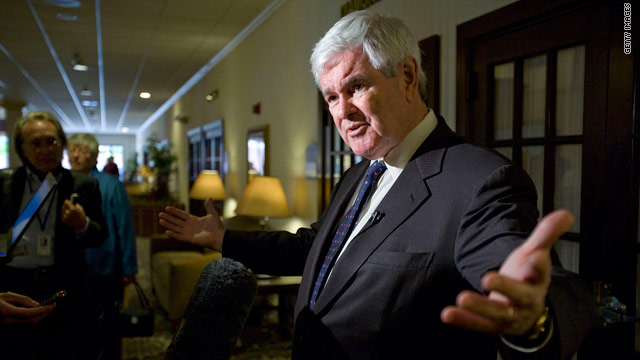 Gingrich vows 'whatever it takes'

Washington (CNN) – Following the resignations of most of his senior staff and questions about whether he had the commitment to mount a full presidential campaign, Republican presidential candidate Newt Gingrich told supporters Friday he knows what the effort will take and is committed to enduring the rigors in order to get his message out.

"As someone who has been in public life for nearly forty years, I know full well the rigors of campaigning for public office. I will endure them. I will carry the message of American renewal to every part of this great land, whatever it takes," Gingrich said in a message emailed to supporters and posted on his Facebook page Friday.

The former House Speaker repeated he is still in the race and that he will take part in the CNN-WMUR-Union Leader debate Monday night in New Hampshire.

"The critical question of how we put Americans back to work will be asked of me and the other Republican candidates. It is the most important question of the campaign," Gingrich wrote.

Sources familiar with the reason for the mass resignations told CNN the staff members had differences with the candidate on how to approach the campaign–especially how to deploy limited resources and to schedule Gingrich’s time on the stump. Campaign events were hard to put on the calendar, as was time with potential big donors. In addition, there were complaints that his wife, Callista, had veto power over all scheduling requests. Sources also point out that the message of the campaign itself became a problem. Gingrich had a hard time making the transition from professional thinker to presidential candidate, preferring to focus on amorphous concepts and issues rather than concrete, voter-friendly issues.

"We had a strategic disagreement about how to run a campaign," Gingrich told ABC News Friday. "There have been very few campaigns that have been solutions oriented and that are oriented to every single American."

Gingrich said he and the staff viewed the campaign in different ways.

"There is a fundamental strategic difference between the traditional consulting community and the kind of campaign I want to run. Now we'll find out what's right," he told ABC.

One departed staff member agreed, but added a critical detail about the departures. He told CNN that Gingrich is "out of money."

"He can't pay his bills," he said. "The light bill doesn't get paid on good will."

"It truly is what you heard, a strategic difference on how the campaign should be run."

And he pinned some of the differences on Gingrich's wife, with whom he closely consults.

"We did not think you should be able to take two weeks off and go on vacation overseas," the former staff member said.

"The Gingrichs don't seem to buy into that. The vacation was Callista's idea. She wanted to go and he couldn't tell her no."

Still, he admitted, "[Gingrich] is the smartest guy in the race."

"But [he's] just making a lot of stupid moves politically."

Among those who left the campaign Thursday were his campaign manager, press secretary, senior strategists and consultants in the key states of Iowa, New Hampshire, South Carolina and Georgia. The exodus raised questions by outside consultants about whether his candidacy can really survive.

Sources have said a major area of disagreement was how much time to spend fundraising, which was a major problem for the campaign. CNN is told that was only exacerbated after Gingrich’s appearance on NBC’s Meet the Press when he called Rep. Paul Ryan’s budget proposal right wing social engineering – setting off a firestorm among Republican activists.

Former congressman Robert Walker, a friend of Gingrich’s, told CNN Friday fundraising was a major issue of disagreement because the staff felt he needed to spend more time fundraising. “The issue came down to ideas vs. money,” Walker said.

In his Friday message to supporters he said he had set out last month, when he first announced his run for the GOP presidential nomination, to run "a substantive, solutions-oriented campaign built upon an alternative agenda" of making Washington smaller and helping to fix America's economic problems. "Because the renewal of America can only begin with you, this will be your campaign."

He told ABC News he was committed to a vigorous campaign schedule.

"I'm prepared to go out and to campaign very intensely, but I want a campaign on ideas and on solutions, and I want to do it in a way that brings Americans together into a large movement," he said.

While many outside experts doubt Gingrich can maintain a viable campaign, those close to him believe it is possible.

“If this ends up being a correction for the campaign that is one thing,” Walker said. “If symbolic of a problem that will continue to fester it will certainly be hard for a campaign in the future.”

One factor that played into this was Gingrich's decision to take a Mediterranean cruise last month after he and aides tried to handle several controversies. Gingrich went back on the campaign trail Wednesday in New Hampshire. On that day he and many of his senior campaign aides had a conference call in which they tried to urge Gingrich to make some needed changes, one source familiar with the discussions told CNN. When Gingrich refused two key aides had a face-to-face meeting with him on Thursday and when they could not come to terms about the direction the campaign would take they resigned and the others followed.

Gingrich does not have any public events before Sunday when he speaks before a Republican Jewish organization in Los Angeles. At that event he is expected to talk about national security, the Mideast and Israel. This spokesman also said – as proof the campaign is moving ahead – Gingrich is planning to unveil a package dealing with housing and economic reforms later this month.

Walker said that event and the upcoming CNN debate are crucial for Gingrich . “He needs to be seen as a serious contender as a result of these” events, he said. “I am not certain that this is something that destroys the campaign, but the response to it will be definitional of what happens to the campaign in the future.”