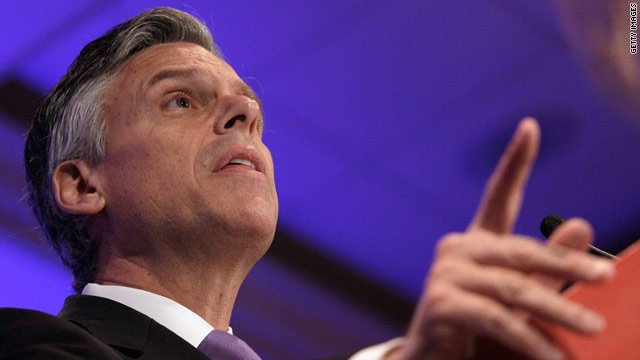 (CNN)-Former Utah Gov. Jon Huntsman tells CNN Chief Political Correspondent Candy Crowley he will announce his intention to seek the presidency in a week and a half.

Huntsman, who resigned from his President-Obama-appointed post as the U.S. Ambassador to China in April, has been courting a bid to seek the 2012 GOP nomination for president for some time.

On the CNN's State of the Union with Candy Crowley airing Sunday at 9 a.m. ET, Huntsman admits "We're about a week and a half out...we are right at the end point."

Click to watch video
The all-but-announced presidential candidate said that his whole family, which includes seven children, are on board, but that he'd be sure to check again before making his decision final-and public.

And though the former ambassador once wrote of admiration for his former boss-who would become his opponent should he secure the nomination-Huntsman has tried to distance himself from President Obama while still touting his ability to reach across the aisle.

He's stepped up his politicking in the nation's capital, dining with GOP senators Wednesday in a popular steakhouse that also serves as a political watering hole. Tennessee's Lamar Alexander, South Dakota's John Thune, Saxby Chambliss of Georgia, Richard Burr of North Carolina, and Tom Coburn of Oklahoma joined him.

He also had lunch with former President George H.W. Bush while visiting Maine in May.

Huntsman has claimed that he will sit out the 2012 Iowa caucuses if he competes for the GOP nomination–a decision not unlike that of another candidate who's pulling back from making a big play for the first-in-the-nation-caucus-state. Former Massachusetts Gov. Mitt Romney revealed his plan to skip the Ames Straw Poll Thursday.

The former governor of Utah's timing is spot-on, as he recently told press gathered at the Faith and Freedom Coalition Conference that he'd discussed a run with his family and hoped to reveal more "in the next week or two."