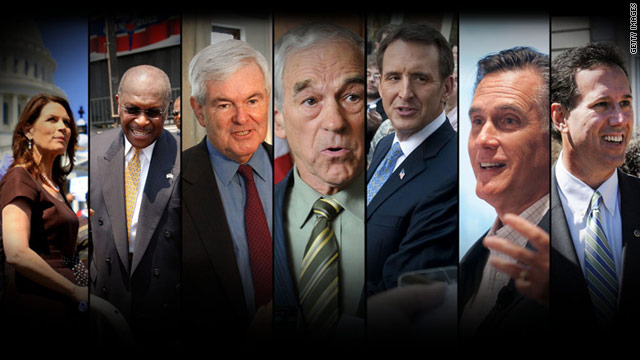 CNN Poll: Romney at top of the GOP field

Manchester, New Hampshire (CNN) - Hours before a major showdown in the battle for the GOP presidential nomination, a new national poll indicates that nearly one in four Republicans say they would most likely support Mitt Romney as their party's nominee.

According to a CNN/Opinion Research Corporation survey, the former Massachusetts governor, who's making his second bid for his party's presidential nomination, grabbed the support of 24 percent of Republicans and independent voters who lean toward the GOP, with former Alaska governor Sarah Palin at 20 percent, ahead of the rest of the field.

The poll's Monday morning release comes hours before a CNN/WMUR/New Hampshire Union Leader Republican presidential debate in New Hampshire, the state which holds the first primary on the road to the White House.

The survey was conducted in the days following attention grabbing events from Romney and Palin, indicating they both received a bounce from their actions.

"For Romney, his official announcement of his candidacy on June 2 moved him to the top of the GOP list, up nine points from a CNN poll conducted late last month," says CNN Polling Director Keating Holland. "Palin took the opposite tack, acting like a candidate but staying far away from any official declaration, but her well-publicized bus tour from the nation's capital to the Northeast made her share of the GOP vote grow seven points from late May."

The 2008 Republican vice presidential nominee says she's contemplating a White House run, but has not taken any concrete steps toward launching a campaign. Neither has former New York City Mayor Rudy Giuliani, who's considering a second bid for the GOP nomination. The poll indicates he has the support of 12 percent of Republicans.

"The former New York mayor's support dropped four points from 16 percent in late May, putting him third on the list and suggesting that his status as a non-candidate isn't helping him," adds Holland.

According to the poll, Rep. Michele Bachmann of Minnesota is at four percent. Bachmann is one of the seven candidates taking part in the debate and she says she'll make an announcement regarding her candidacy later this month in Iowa, the state that kicks off the presidential primary and caucus calendar.

Former Minnesota Gov. Tim Pawlenty is at three percent, with former Sen. Rick Santorum of Pennsylvania at one percent. Also at one percent is former Utah Gov. and U.S. Ambassador to China Jon Huntsman. He is not taking part in the Monday night debate but tells CNN Chief Political Correspondent Candy Crowley that he'll announce his candidacy in the next week and a half.

Name recognition plays a big role in national horserace polls at this stage in a presidential cycle, which is why Monday night's debate provides many of the candidates low in the polls with a big opportunity to increase their name identification by introducing themselves to a national television audience.

"Romney has the blessing, and the curse, of inevitability. Forty-two percent of Republicans say that, regardless of whom they support, Romney is the candidate who is most likely to win the Republican nomination next year. That's three times higher than Palin, the next Republican on the list," says Holland.

Do Republicans want to see Giuliani and Palin run?

On the Democratic side, eight in ten Democrats and independents who lean toward the Democratic Party say they would like to see President Barack Obama re-nominated next year.

How would Americans feel if Obama were re-elected next November?

According to the poll, 19 percent say they would be excited if that happened and another one in three would be pleased but not excited. Overall, 52 percent would feel positively about an Obama second term.

Thirty-two percent say they would be displeased by an Obama win next November and 16 percent would be angry.