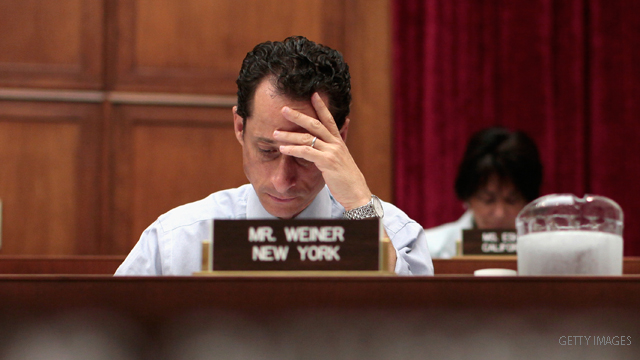 Democratic source: Weiner 'on the fence' about resigning, in state of 'despair'

Washington (CNN) - A Democratic source who spoke to Anthony Weiner after Democratic leaders called on him to resign Saturday told CNN that even with that public hammer dropped on him, Weiner made clear he was still "on the fence" about whether to step down.

Democratic sources CNN has talked to since Saturday said that Weiner told Democrats pressuring him to go that he wanted to wait for his wife Huma to return from a trip with Hillary Clinton. This Democratic source told CNN that Weiner specifically said in their phone conversation that he needs to "look her in the eye" and discuss this before he makes any decision, because he has done enough to hurt her.

The same Democratic source said that Weiner was emotionally falling apart on the phone in this and other conversations and in a state of "despair." Other Democratic sources who talked to him late last week described him the same way. Another person who spoke to him on Saturday called Weiner's disposition "turbulent."

Separately, CNN reported midweek last week that pressure on Weiner was mounting and that privately some colleagues who were telling him it was time to resign said he had until the "end of the week."

Still, even though Weiner received that warning and discussions among senior Democrats were in the works about public calls for resignation, two Democratic sources involved in conversations told CNN that the revelation Friday of Weiner's contact with the 17-year-old girl in Delaware was the final straw.