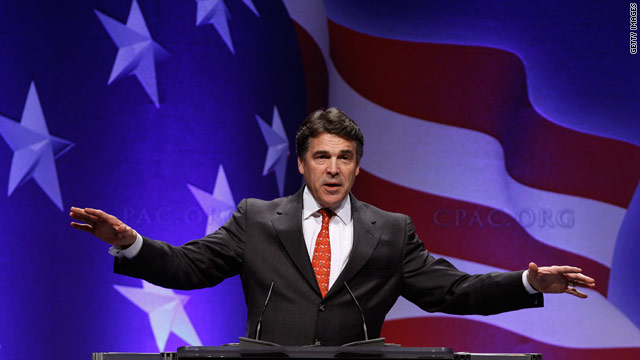 New York (CNN) -Texas Governor Rick Perry, who has said he is considering running for the Republican presidential nomination, is in the middle of a cross country swing talking to key constituencies including those in the Big Apple.

On Tuesday night he addresses about 200 at a sold-out New York County Republican dinner.‬ ‬At the dinner Perry is replacing Donald Trump, who pulled out after he decided not to run for president.

This last weekend he spoke to a Hispanic anti-abortion rights group in California and later this week he speaks with other contenders at the Southern Republican Leadership Conference in New Orleans.‬ ‪

New York County Republican chairman Dan Isaacs told CNN Perry's appearance at the Tuesday dinner has drawn more attention than when Trump was going to be the keynote speaker.

"Among active Republican there is a lot interest to meet the governor."

While in New York, Perry met Tuesday afternoon with about 30 leading GOP donors– businessmen, Wall Street types and attorneys as well as other key party leaders over lunch. Issacs said he suggested the get together, and Perry agreed.

Perry wasn't talking much as he left the lunch and rushed to his waiting motorcade but when asked by CNN about a run for president he said, "I may run... in Central Park later."

Kidding with the media aside, when pressed last month about running for President, Perry said "I'm going to think about it."

Perry has a strong base among the party's social conservative activists and has a strong job creation record that he would tout if he did get into the race although critics point out the state has problems with poverty. A recent poll of Texans showed only 4 percent of them wanted Perry to run.

A CNN Opinion Research poll last month showed 50 percent of Americans did not want Perry to run for President while 40 percent said they did.

One thing that has increased attention on Perry is the fact that two of Newt Gingrich's key campaign operatives who were part of the mass resignations last week are close to Perry. Sources with knowledge of the situation have said the exodus from Gingrich's campaign was not related to the governor's deliberations.