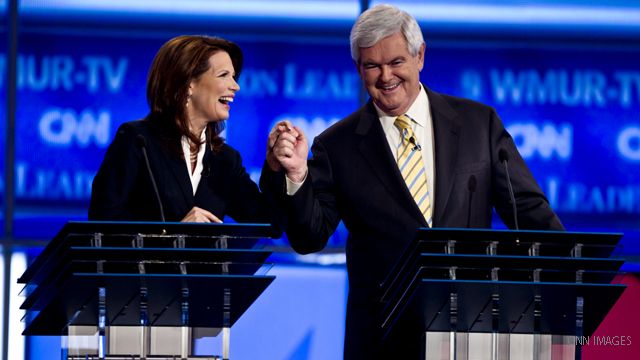 Bachmann fine print – What about the House re-election campaign?

Manchester, New Hampshire (CNN) - Now that Rep. Michele Bachmann is officially running for president, she is not running for re-election to her seat in Minnesota's 6th Congressional District.

But if her presidential hopes don't pan out, could she keep the re-election plan - as a back-up plan?

After Bachmann appeared in the first 2012 presidential debate in New Hampshire – sponsored by CNN, WMUR and The New Hampshire Union Leader – her campaign representatives talked to reporters and explained Bachmann's intentions while not closing her options.

"With the filing of the papers today she is declaring that she will not be seeking re-election for Congress in Minnesota," Bachmann adviser Alice Stewart said. Earlier a statement posted on Bachmann's Facebook page said the same.

But could Bachmann suspend her presidential campaign, if it doesn't work out, and re-open her House re-election campaign?

Bob Heckman, also a Bachmann adviser, also explained that Bachmann is committed to running for president.

But when pressed by reporters if there's a small chance that Bachmann could re-ignite her House re-election campaign, Heckman said, "Sure. Absolutely. But that's not part of the plan."