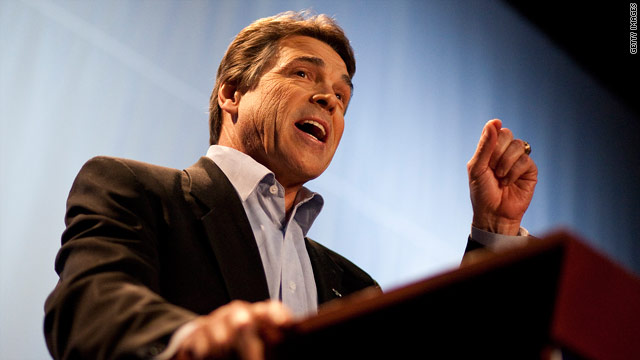 New York (CNN) - Emphasizing that the country needs to embrace a conservative vision to help solve some of its problems, Texas Gov. Rick Perry urged an audience of New York Republicans Tuesday night to "stand with us over the next 16 months."

Perry is seriously considering entering the GOP presidential field. Though his speech to the New York County Republican Committee didn't specifically mention that possibility, it contained what could be the outlines of a future campaign vision.

He asked the sellout audience: "Are you ready to take this country back?" He said he was referring to the need to elect more GOP governors to help states regain more power.

He talked about how Washington has too much power and attacked the Obama administration's handling of the economy.

"They promised jobs, and they delivered economic misery," said Perry. "America cannot continue on this course of economic ruin," he said citing the high unemployment rate and growing debt.

He alluded to the importance of upcoming elections.

"Conservatives are alive and well ... we will send a message in 2011 and 2012" against such Democratic-pushed programs as the 2009 stimulus and the Patient Protection and Affordable Care Act, he said, and future elections will help "to ensure we are electing the right kind of leader."

Several times he touted some of Texas' successes, including tort reform and leading the nation leading in job creation, as examples of the benefits of conservative fiscal policy and empowering the private sector.

"We have produced the strongest economy in this country," he said.

In March Perry agreed with state legislators to use $3.2 billion in reserves to help erase a $4.3 billion deficit in a deal that also called for hundreds of millions of dollars in budget cuts.

A recent University of Texas/Texas Tribune poll showed the governor with a 42% approval rating.

Known as a leader in the social conservative wing of the party, Perry talked about his strong opposition to abortion and how that was of paramount importance. He also talked about how the Republican Party can find a home for both social and economic conservatives.

Perry said Tuesday six weeks ago running for the GOP nomination was not on his "radar screen."

Asked what changed, "it was a number of conversations with people I trust, including my wife, that basically said listen, our country is in trouble, and you need to give this a second thought," Perry told Fox News on Tuesday.

He said he did not have a timetable for making a decision.

"There is some, I guess, drop-dead time that you have to be in," Perry told the Texas Tribune Tuesday. "I don't think it's (arrived) yet."

"People would like to have some other options in the race," he told the publication.

The Tuesday dinner speech is one in a series of national appearances this week before key constituencies. He asked the audience to text the word "leadership" to a number and that would give them future updates them on some of his initiatives.