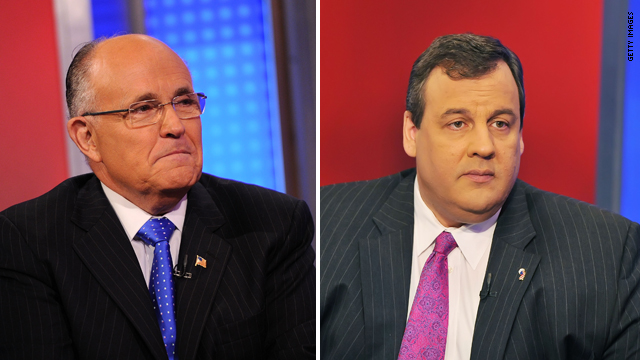 New York (CNN) – One New York politician considering running for President broke bread Wednesday in the Big Apple with another adamant he is not.

Presidential politics was surely one topic on the menu though as former New York Mayor Rudy Giuliani lunched with New Jersey Gov. Chris Christie, sources familiar with the meeting confirmed to CNN. The get together comes as Giuliani is said to be considering again putting his hat into the Republican presidential ring, and Christie reiterating to CNN he will not run this year for the GOP nomination.

Sources, who would only speak not for attribution, refused to discuss the meeting in any detail because it was private.
Christie, who is popular among GOP activists, has met with several of the GOP presidential candidates.

"I'm 100 percent certain I'm not going to run," Christie said Tuesday on CNN's "Piers Morgan Tonight." He also said he has not seen a "best option" yet among the current candidates who could compete with President Obama.

Giuliani, whose 2008 campaign quickly folded, has traveled to New Hampshire several times this year-those close to him have previously said he is seriously considering another run. Several outside Republican consultants have said Giuliani would not have a good chance of winning the nomination this time around if he chooses to mount a campaign.

"This lunch has been in the works for a while," one source familiar with the meeting told CNN Wednesday morning. The source emphasized while 2012 politics would be one topic the two men have known each other for years from when Christie was U.S. Attorney in New Jersey. Giuliani was the only national candidate to campaign for Christie when he ran for governor in 2009.

Giuliani still has a $2.64 million debt from his 2008 run according to a March filing with the Federal Election Commission.

It was a busy day for Giuliani. Earlier Wednesday he met with GOP Texas Gov. Rick Perry, who's been stirring up his own presidential buzz. Their meeting took place a day after Perry's widely heralded speech to the New York County Republican Committee.