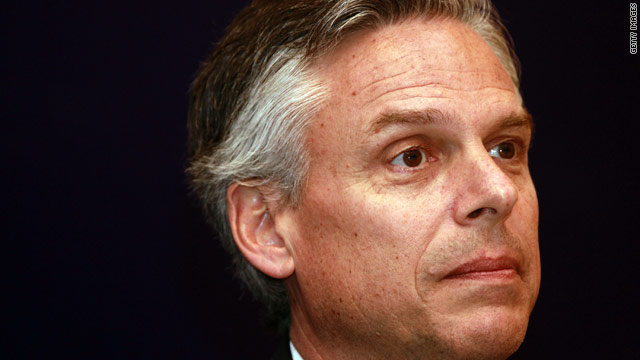 No surprise Iowa not included in Huntsman post announcement tour

(CNN) - After formally announcing his candidacy for president next Tuesday at Liberty State Park in New Jersey (with the Statue of Liberty as his backdrop), Jon Huntsman will swing through some, but not all, of the states that vote near the top of the presidential primary and caucus calendar.

CNN has confirmed that the former Utah governor and former U.S. ambassador to China will head to New Hampshire next Tuesday, after declaring his candidacy, followed by stops in South Carolina Wednesday, Florida on Thursday, and Utah and Nevada on Friday.

New Hampshire holds the first primary on the road to the White House and South Carolina is the first southern state to vote. Florida's primary date is not set, but it's expected the state will vote early in the process. Florida is also a crucial battleground state in the general election and the Republican's nominating convention will be held in Tampa next summer. Nevada's caucus is scheduled to go third according to the Republican National Committee calendar. Utah is Huntsman's home state.

What's missing is Iowa, which kicks off the caucus and primary season.

Early this month, while campaigning in New Hampshire, Huntsman told reporters that he will not be competing in Iowa because of his opposition to subsides for corn-based ethanol, a stance that is very unpopular in a state that grows a lot of corn.