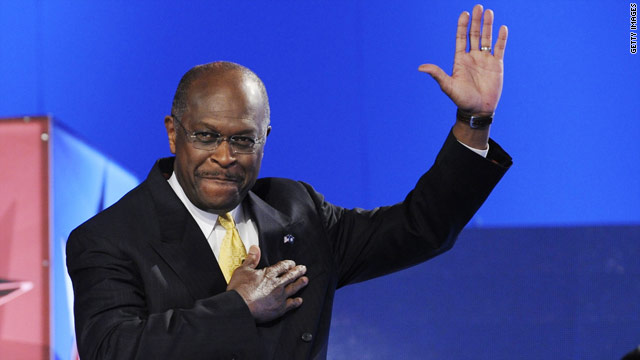 The Republican presidential candidate, a former Godfather's Pizza CEO and radio talk show host, used his address to criticize those Republican pundits who said Cain didn't have a chance at winning his party's nomination. Once a longest of long shots for the Republican nomination, Cain has risen in the national polls in the GOP horserace, and now stands in the high single digits or low double digits in the most recent surveys.

Cain brought the audience at this major gathering of Republican activists to their feet four times during his Friday afternoon speech. Among the crowd pleasers: "The United States of America is not going to become the United States of Europe, not on our watch."

Cain also got the audience to rise from their seats with his strong defense of Israel, proclaiming that if "you mess with Israel, you mess with the United States of America."

That line also brought some boos from Ron Paul supporters, who were waiting for the longtime congressman from Texas to speak. Paul, who along with Cain, is one of about a half dozen GOP presidential candidates addressing the conference, followed Cain at the podium. Paul's a strident opponent of U.S. international alliances and of the country's military involvement in Afghanistan.

Cain began his speech by quoting from Martin Luther King, saying "I have a dream." He went on to say that he has two dreams, the second of which is "that you are looking at the next president of the United States. He went on to criticize President Barack Obama, saying that the U.S. faces a "deficiency of leadership crisis in the White House."

With the conference being held just a few blocks from the French Quarter of New Orleans, Cain tested out his French, saying that "when we put the right person in the White House, moi, America will be exceptional again."

Moi is French for me.