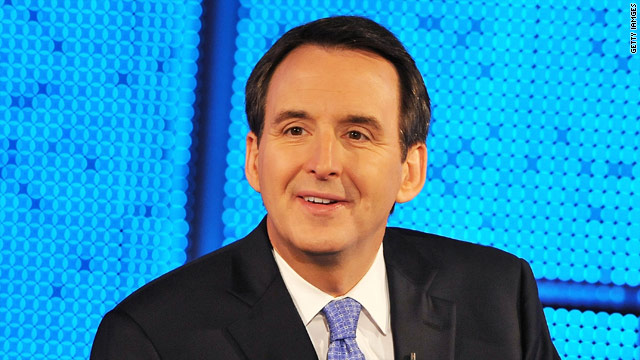 (CNN) - Former Minnesota Gov. Tim Pawlenty has acknowledged he missed a big opportunity to go after a political rival during a CNN GOP primary debate earlier this week, but he's now attempting to go back on the offensive and raise some cash.

The presidential hopeful blasted out a fundraising letter to supporters early Friday, a day after he renewed his attacks on former Massachusetts Gov. Mitt Romney for his role in shaping a health care reform law in Massachusetts that served as a model for the federal law passed last year.

In a tweet on Thursday, and later during an appearance on Fox News, Pawlenty acknowledged that he erred during the debate when he seemingly backed down from comments he had made on Sunday attacking Romney for his role in passing a health care reform law in Massachusetts that served as a model for the federal law passed by President Barack Obama.

"On seizing debate opportunity re: healthcare: Me 0, Mitt 1. On doing healthcare reform the right way as governor: Me 1, Mitt 0," Pawlenty tweeted.

When asked about the incident on Fox News' Hannity Thursday, Pawlenty said, "I think in response to that direct question, I should have been much more clear during the debate, Sean. I don't think we can have a nominee that was involved in the development and construction of Obama-care and then continues to defend it."

One of the biggest challenges Romney faces as a nominee is defending his role in shaping the Massachusetts health care law to conservatives who oppose its inclusion of an individual mandate to buy health insurance. Romney has tried to walk a fine line of defending the Massachusetts law as a state experiment while panning the federal law as overreaching.

His opponents, however, have consistently sought to tie the former governor to Obama's health care reform law. It was Pawlenty's use of the term 'Obamneycare," last Sunday on Fox that prompted the awkward debate exchange in which Pawlenty demurred when asked about his earlier comments by CNN Chief National Correspondent John King.

Pawlenty's attempt to focus his answer on President Obama rather than back up his criticism of Romney was widely panned as a missed chance to go after his opponent.

But on Thursday, Pawlenty was back on the attack, saying of Romney, "I don't think you can prosecute the political case against President Obama if you are co-conspirator and one of the main charges against the president on the political level. And so, it really puts our nominee, if that who it turns out to be in a very difficult spot."