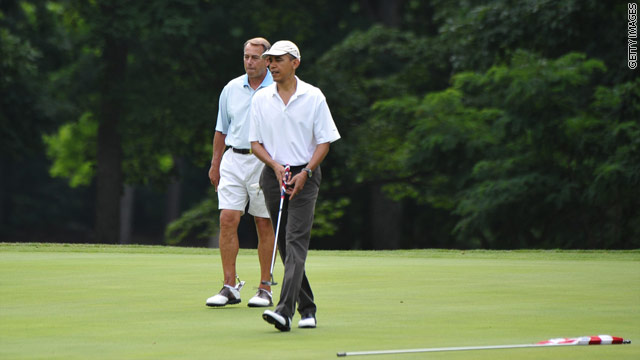 The victory netted the winning team $2 apiece, according to a joint statement released by the White House and the Speaker’s office. After finishing their round, the foursome headed to the patio of the course’s clubhouse to grab a cold drink, catch some U.S. Open coverage and visit with service members.

But apparently, what’s said on the links stays on the links: The joint statement didn’t include any details of conversations on the course at Andrews Air Force Base.

The long-anticipated bipartisan day on the golf course comes amid the latest round of high-stakes spending cut negotiations between the White House and GOP leaders in Congress, as the August 2 debt limit deadline fast approaches.

Earlier this week, White House Press Secretary Jay Carney told reporters nobody expected a miracle on the green. “I think I can say with great confidence that they will not wrap up the 18th hole and come out and say that we have a deal,” said Carney, who added that he thought time on the links “can only help improve the chances of bipartisan cooperation. It certainly can’t hurt it, unless someone wins really big.”