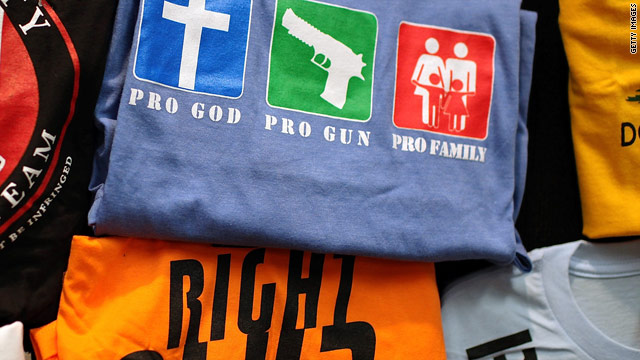 But their sharp attacks were interrupted by stern warnings from party leaders to remain focused on winning in November 2012 instead of becoming preoccupied with ideology, litmus tests or silly distractions.

The starkest admonition came from Mississippi Gov. Haley Barbour, a respected party elder and political tactician, who told the conference that "purity is a loser" in politics.

He urged Republican voters to concentrate on a pocketbook-oriented economic message, and to pick a candidate who offers "plain-spoken, common-sense solutions" instead of an ideology-driven agenda.

"We are not going to have a perfect candidate," Barbour said. "There has only been one perfect person that has ever walked on this Earth, and there's not going to be one who runs for president in 2012."

Barbour's pragmatic message was well received by the roughly 2,000 delegates who came to New Orleans for the conference, which was organized by the Louisiana Republican Party.

But in the end, it was wave after wave of pointed attacks - the very rhetoric that Barbour cautioned against - that earned the rowdiest applause at the conference.

U.S. Rep. Michele Bachmann of Minnesota gave the president a "big F on his economic report card" and claimed, without corroboration, that Obama wants to bankrupt Medicare in order to force seniors to enroll in his new national health care program.

And just 24 hours after Barbour's speech, Texas Gov. Rick Perry said Republicans should never back down from their core principles in order to score points with the electorate.

"Our party cannot be all things to all people," thundered Perry, who has emerged in recent weeks as another potential presidential candidate. "It can't be. Our loudest opponents on the left are never going to like us, so let's stop trying to curry favor with them."

The appearance drew applause and raucous laughter but was hardly in keeping with Barbour's plea to stay focused on defeating Obama rather than being distracted by political sideshows.

Organizers eventually grew uncomfortable with the off-color humor and pulled the comedian off the stage.

Louisiana Gov. Bobby Jindal, who may run for president himself in 2016, echoed his neighboring governor and reminded Republicans that winning back the White House is the ultimate prize.

He said conservatives should not stoop to the level of liberals who savaged George W. Bush during the previous administration.

"We must not mimic their shallow approach," Jindal warned.

If the results of a presidential straw poll conducted at the conference were any indication, Republicans may be ready to put aside some elements of party dogma this primary season.

But it was former Utah Gov. Jon Huntsman's surprising second-place finish that attracted the most attention.

Huntsman did not attend the conference, but his strong showing was surprising given his moderate stances on climate change and same-sex civil unions, positions that put him at odds with conservative activists who hold major sway in the key early caucus and primary states.

Even Tony Perkins, president of the conservative Family Research Council, told CNN "there's a good possibility" he could support any of the current crop of Republican candidates in a general election against Obama.

"Most of them are pretty good," Perkins said.

Perkins said he agrees with Barbour's anti-purity approach, but only to a point.

"If you've got the core principles, where you are strong on national security, if you understand the idea of economic freedom as well as traditional values, but then within those parameters there are degrees of difference of opinions, yeah, that's OK," he said.

But, he added, "If you are saying we are going to take a third of these issues and we are not going to deal with them, then that ain't going to work."