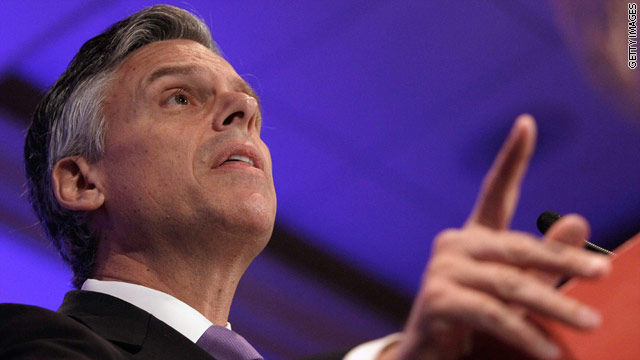 New Orleans, Louisiana (CNN) - Jon Huntsman was a no-show at the Republican Leadership Conference in New Orleans, but the former Utah governor raised eyebrows with a surprising second place in the conference’s 2012 presidential straw poll Saturday.

Texas Rep. Ron Paul, who delivered a fiery and well-attended speech here in Friday, continued his record of strong straw poll performances and won the vote outright with 612 votes. Huntsman came next with 382 votes.

Former Pennsylvania Sen. Rick Santorum finished in eighth place with 30 votes. Former Minnesota Gov. Tim Pawlenty, who did not speak at the conference, finished in a dismal ninth place with 18 votes.

It was Huntsman’s surprising runner-up finish, though, that grabbed the most attention on Saturday when the results of the two-day vote were announced.

When he was booked as one of the speakers at the semi-annual event, there were questions about how Huntsman - who has broken with GOP orthodoxy on issues like climate change and same-sex civil unions - would be received among the conservative activists who typically attend such gatherings.

Huntsman, though, came down with a last minute cold this week and decided to skip the event. He dispatched his wife, Mary Kaye, to greet conference-goers in his stead.

And his strong finish in the straw poll might have gotten a boost from some behind-the-scenes work by his political team. Several of his political advisers, including John Weaver, Chris Allen, John Yob and Jake Suski, made the trip to New Orleans and were seen huddling with delegates at the riverfront hotel where the conference was held.

Miller attributed the win to the former ambassador to Chinas economic message. He did not comment when asked if Huntsman advisers paid for their supporters to get to the ballot box.

“His willingness to take the debt crisis seriously and his foreign policy message really resonated with the younger conservatives who attended,” Miller said.