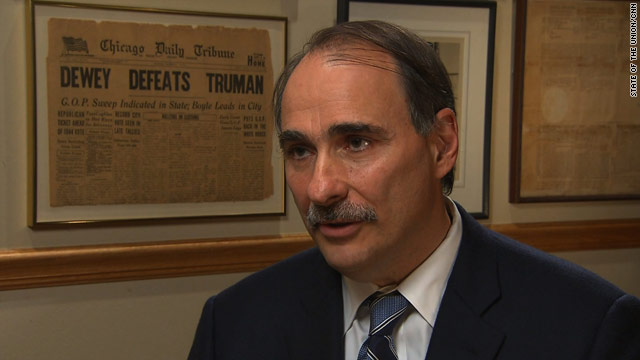 "I think he's a very bright, fluent person," he said. "It was a little surprising to me because when we were in Shanghai, we got a chance to talk and he was very effusive about what the president was doing."

"He was a little quizzical about what was going on in his own party," Axelrod continued, "You got the strong sense that he was going to wait until 2016 for the storm to blow over."

"So I was surprised when he emerged as a candidate."

Balking at Huntsman's description of Obama's administration as a "failed presidency," Axelrod countered, "That is in conflict with what he communicated to us in 2009."

Axelrod claimed that Huntsman had plenty of opportunities to question the president's policy in his own presence, but the soon-to-announce 2012 GOP presidential candidate never said a word.

"If he had suggestions on the economy, he had an excellent opportunity to suggest them then, when we were all together in China," he said.

And the senior strategist had his own theory about Huntsman's change of heart.

"I think that what has changed is not his view of the economy, but his view of his own chances to perhaps win the nomination," Axelrod said.

"That's politics. He's a politician, and he sees an opportunity."

Huntsman was appointed as the U.S. ambassador to China by President Obama in 2009. He resigned from the post in April and is expected to announce his bid for the 2012 GOP nomination for president June 21.