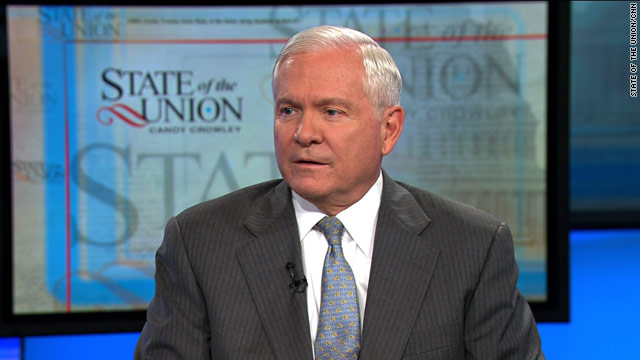 Washington (CNN) – The United States has been engaged in peace talks with the Taliban, Defense Secretary Robert Gates told CNN's "State of the Union" on Sunday, 11 days before he is set to resign.

"There's been outreach on the part of a number of countries, including the United States," he said. "I would say that these contacts are very preliminary."

Gates affirmed that "a political outcome is the way most of these wars end" and described the communication as being handled by the State Department for "a few weeks, maybe."

"Who really represents the Taliban?" he asked. "We don't want to end up having a conversation at some point with somebody who is basically a freelancer."

As Gates described the early stages of communication, he asserted that any kind of resolution will take time.

"My own view is that real reconciliation talks are not likely to be able to make any substantive headway until at least this winter," he said.

Among the conditions required by the United States of the Taliban: complete disassociation from al Qaeda and "meeting the redlines that President Karzai and the coalition have laid down."

And to Americans who may be "war weary" Gates points out, "I understand we have been at war for ten years, but we have not been at war full-scale in Afghanistan except since last summer."

"The reality is the United States had a very limited commitment in Afghanistan until well into 2008. And we didn't have the right strategy and the right resources for this conflict," he said.

"I understand everybody is war weary. But the reality is we won the first Afghan war in 2001-2002. We were diverted–by Iraq. And we basically neglected Afghanistan for several years," the secretary continued.

Gates, who has served as Secretary of Defense since 2006, believes that the Taliban must "feel themselves under military pressure" by winter 2011 for the talks to be successful-which seems at odds with the president's plans to begin troop withdrawal in July.

"Whatever decision (President Obama) makes, we will have a significant number of troops remaining in Afghanistan," Gates stated. "We've make a lot of progress over the last 15 months."

But he also countered, "We can do anything the president tells us to do. The question is whether it's wise."

One certainty remains for the secretary, who is also the only holdover from President George W. Bush's Cabinet: an end to U.S. combat presence in Afghanistan isn't complicated.

"How this ends is essentially the same way that it ended in Iraq-with us playing a key role for some period of time…this transition to Afghan leadership so that they can keep control of their own country, so that al Qaeda can no longer find a safe haven in Afghanistan, and so the Taliban cannot forcibly overthrow the government of Afghanistan-that doesn't seem that hard to me for people to understand," he said.