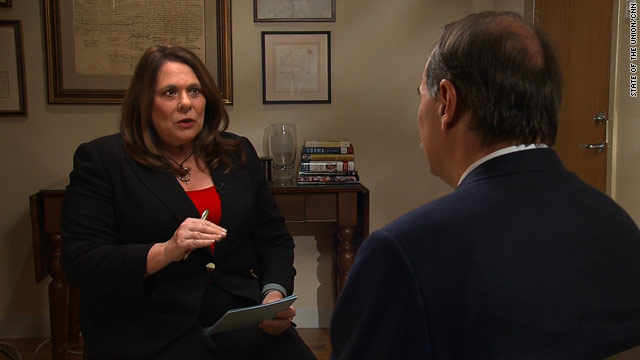 State of the Union Crib Sheet for Sunday June 19th

Washington (CNN)-Well first of all, Robert Gates would be the first to tell you that as of Sunday, he has 11 – count them 11 – more days as Defense Secretary, after which he is departing Washington. As a matter of fact, he told me he is leaving Washington June 30tht, his last day in office. I mean, literally moving. This is a man raring to go and as he leaves has been – he’s always been very direct – but he’s being extraordinarily direct on a lot of things that worry him. And I think he articulated them pretty well across the three segments of the show.

He worries about budget cutting in Washington and that it will hit the Pentagon too hard, particularly when it comes to the fighting force and the training of the troops – he considers that a sacrosanct budget. He thinks Libya’s going to turn out fine. He’s worried about the influence of Iran in Iraq. He said the attacks – the deadliest day for American soldiers in Iraq was earlier this month, the deadliest day in two years. So he’s worried about the influence of Iran, believes that the U.S. will leave some troops inside Iraq to continue with advising etc.

Afghanistan, he just would not – here’s what we know. The totality of Gates is that he believes the U.S. needs more time to solidify its gains in Afghanistan. He clearly is arguing on the side of fewer cuts than others in the administration are in terms of the troop drawdown in July. He kept saying ‘It’s the president’s decision,’ wouldn’t tell us what he advised, but it’s very clear he’s on the side of ‘leave more in now so we can bring more out later.’

Just in terms of where he sees the military going, again, I think his primary concern remains that budget cuts will devastate a military that still needs to remain strong.

David Axelrod is the president’s top political consultant in the re-election campaign. I guess what amazed me was how willing Axelrod was to go after the potential Republican nominee. Sometimes they like to stand off and let the party that’s fighting out the nomination do it all by themselves. But he was, I thought, particularly acute and sharp when going after Jon Huntsman, who used to be the president’s ambassador to China.

Huntsman, is a Republican, former governor of Utah. And Axelrod said ‘Gee, he didn’t mention any of this to me while I was in China, and gosh, at the time he really had some reservations about the direction of his party.’ I said that Huntsman had said in an earlier interview that he believed the president had failed on turning the economy around. Axelrod says very pointedly, ‘Gosh, he could have made suggestions at any point when he worked for the president.’

So clearly I think the Huntsman candidacy, which will be announced this week, stings. But they also have big files , it’s very clear, on Romney, Pawlenty and the others. So the game is on as far as 2012 is concerned, and the game is over as far as Secretary Gates is concerned.

Come back next week.

Defense Secretary Robert Gates on CNN’s “State of the Union” on preliminary peace talks between the U.S. and the Taliban

“The first question we have is who represents Mullah Omar. Who really represents the Taliban? We don’t want to end up having a conversation at some point with somebody who is basically a freelancer. My own view is that real reconciliation talks are not likely to be able to make any substantive headway until at least this winter. I think the Taliban have to feel themselves under military pressure and begin to believe that they can win before they’re willing to have a serious conversation.”

“How this ends is essentially the same way that it ended in Iraq – with us playing a key role for some period of time. Building up the local security forces – in one case Iraq – in this case Afghanistan. Degrading the capability of the Taliban to the point where Afghan forces can take care of them, and then transitioning the responsibility for security to the Afghans. That transition has already begun.”

Defense Secretary Robert Gates on CNN’s “State of the Union”

“I know the American people are tired of war. But look, the reality is the United States had a very limited commitment in Afghanistan until well into 2008. And we didn’t have the right strategy and the right resources for this conflict and a lot of resources – those needed to do the job – until the late summer of 2010. The president made decision for the second surge in December of 2009. It took us some months to get the additional surge in. So I understand everybody is war weary. But the reality is we won the first Afghan war in 2001-2002. We were diverted by Iraq. And we basically neglected Afghanistan for several years.”

Defense Secretary Robert Gates on CNN’s “State of the Union”

“If the United States is directly threatened, I’ll be the first in line to say we should use military force and that we should do with all the power that we have available to us. It’s wars of choice that I’ve become more cautious about. And being very careful about electing to send military troops - or send military troops in harm’s way wherever they may be if it’s a matter of choice as opposed to a direct threat to the United States.”

“We worry still about al Qaeda central there on the Pakistani-Afghan border. But we also worry about al Qaeda in Arabian Peninsula. Yemen in North Africa, in Maghreb. So this is a threat that in some ways has metastasized. And the question is whether Zawahiri, the new leader taking bin Laden’s place, can hold these groups together in some kind of cohesive movement, or whether it begins to splinter and they become essentially regional terrorist groups that are more focused on regional targets.”

“I think our base is going to be very, very solid because they’ll understand what the choices are and the direction in which he wants to lead and the direction in which the Republican candidate will want to lead. And I think one of the things that’s going to inform that campaign is whether that Republican candidate is going to yield to some of the forces within his own party or her own party that is driving their party to the far right.”

“If you’re Governor Romney and you say, I’m going to – I’m going to turn this economy around, I’ve got the answers and you don’t offer them – then people have a right to say, well, why is it that your state was 47th in the country in job creation when you were governor? If you’re Governor Pawlenty and you say, we’ve got to clean up this fiscal mess, people have a right to ask, then why did you leave your state with a $6.2 billion deficit? That’s what campaigns are about.”

“It was a little surprising to me because when we were in Shanghai, we got a chance to talk. And he was very effusive – this was in the fall of 2009 – about what the president was doing. He was encouraging on health care. He was encouraging on a whole range of issues. He was a little quizzical about what was going on in his own party. And you got the strong sense that he was going to wait until 2016 for the storm to blow over.”

Can the president conduct a war without congressional authority? He doesn’t have that authority when it comes to Libya. And is U.S. activity in support of the NATO effort in Libya actually a war? The questions played out over the Sunday talk shows with the president finding safe harbor from Republicans and getting grief from Democrats.

“I think it’s an infringement o n the power of the commander-in-chief. The president’s done a lousy job of communicating and managing our involvement in Libya. I will be no part of an effort to defund Libya or our efforts to bring Gadhafi down. The president needs to step up his game but Congress needs to sort of shut up.”

Sen. Dick Durbin (D-Majority Whip), on NBC’s “Meet the Press”
“I think the War Powers Act and Constitution make it clear that hostilities by remote control are still hostilities… What we should do is act on a timely basis to pass congressional authorization under the War Powers Act.”

Also involved in the intra-party dust-up – the Republican’s 2008 presidential nominee. John McCain invoked the name of one of the party’s most revered icons in pushing back against 2012 candidates McCain sees as borderline isolationists.

Also this Sunday, the public push and pull over what the president will decide privately: how many U.S. troops to pull out of Afghanistan this summer. Earlier on State of the Union, Defense Secretary Robert Gates, who has called for a modest drawdown, would only say the troop withdrawal has to be politically credible at home. On CBS, Democratic Senator Chuck Schumer said there is room for significant reduction.

Sen. Charles Schumer (D-NY), on CBS’ “Face the Nation”
“It was a little surprising to me because when we were in Shanghai, we got a chance to talk. And he was very effusive – this was in the fall of 2009 – about what the president was doing. He was encouraging on health care. He was encouraging on a whole range of issues. He was a little quizzical about what was going on in his own party. And you got the strong sense that he was going to wait until 2016 for the storm to blow over.”

Axelrod – Behind the Scenes

Missed any of the show? Check out the Political Ticker