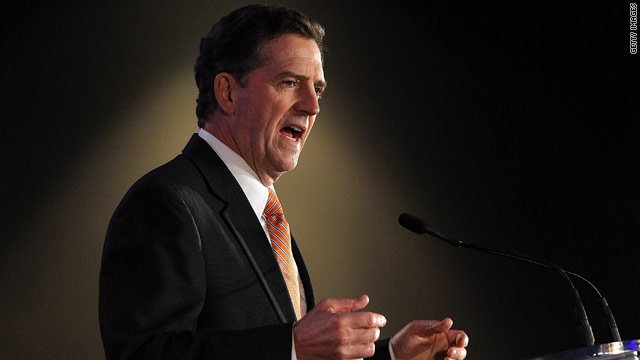 Washington (CNN) - With the Republican base largely unified in its contempt for President Obama's health care law, Sen. Jim DeMint, an icon of the tea party movement, has been forced to explain his early support for former Massachusetts Gov. Mitt Romney's health care plan, which was a model for reform on the federal level.

DeMint told CNN over the weekend at the Republican Leadership Conference in New Orleans that he supported Romney's campaign in 2008 because he admired the then-governor's attempt to fix the broken health care system.

"At the time I was very interested in any governor who took that on, because I knew if states didn't, we'd end up with something like 'Obamacare,'" DeMint said.

Since then, DeMint explained, "we have come to the point that what they did in Massachusetts did not work, and it's not something that should be a model at the state or national level."

"I think the goal of getting everyone insured and making insurance available to everyone is very important," he told CNN. "But I think we can find better ways to do it."

Romney has condemned the Obama plan in the harshest terms as a federal takeover of health care, but says that states like Massachusetts should be allowed to develop their own solutions. "Mitt Romney and Senator DeMint both agree that 'Obamacare' is a bad law, and that it should be repealed," Romney spokeswoman Gail Gitcho said when asked about DeMint's comments.

DeMint said his concerns about "Romneycare" are centered on the health care exchanges created by the plan and the accompanying mandate that every Massachusetts resident purchase health insurance, lest they be hit with a financial penalty.

"I have never supported a mandate," DeMint said. "It's just not a good way to make things work in our country, to require somebody to do something. There are different opinions on that but I have always appreciated anyone who had the courage to take it on."

DeMint has not taken sides in the 2012 presidential race but told CNN over the weekend that he "will know by the fall" which Republican he will support.

He said he is keeping an "open mind" about the candidates and did not rule out supporting Romney again.

DeMint's endorsement would be a major boost for any Republican candidate hoping to win the pivotal South Carolina primary.